Szcz the Day, along with the Matt Szczur Foundation, seeks to raise awareness for bone marrow donors. The pro outfielder and Cape May native became aware of the Be the Match Registry while a student at Villanova University, eventually saving the life of a young girl in Ukraine diagnosed with leukemia.

Cape May Brewing Co. teamed up with the Matt Szczur Foundation to host multiple events with representatives from Be the Match on hand to register potential donors.

“I love working with CMBC,” Matt says. “It is humbling to know they want to be a part of such a special cause to me. Their support for the second year in a row is greatly appreciated, and I am grateful for them helping me spread the word and awareness for my cause.”
Fun & Random, Local Interest, Szcz the Day

Sometimes partnerships get you a little more than you bargained for. John Lennon and Paul McCartney teamed up and changed the face of Western music forever. Neil Armstrong, Buzz Aldrin, and Michael Collins teamed up and got humans to the moon. Ryan, Hank, and Mop Man got together and made some killer beer.

Last year, we partnered with Villanova to make Demisemi for the University’s 175th anniversary, and out of that came a stellar friendship with Cape May native, Padres outfielder Matt Szczur.

We debuted Demisemi at our first Pint Night of 2017, supporting the Andy Talley Foundation and Be the Match. It was such a rousing success that we’ve decided to repeat the magic. On January 12th, $1 from each pint and flight served between 5 and 8pm will be donated to Matt’s newly-founded Matthew Szczur Foundation.

Gary Monterosso and the crew from What’s on Tap were on hand at our Pint Night in January for the release of Demisemiseptcentennial Pale Ale — our brew in honor of Villanova’s 175th anniversary. They got together with Ryan and Cubs outfielder, ‘Nova grad, and Cape May native Matt Szczur.

“Really, really good people,” Gary said, in reference to our commitment to being a good neighbor.

Gary is loving Demisemi, calling it a “good, sessionable beer.”

“I really like that,” said co-host Kimmy Kocktail, after her first taste. “I just like all of their beers.”

Check out the video below to see what else they had to say, including his interview with Ryan and Matt. You can hear Matt talk a little more about his involvement with the Andy Talley Foundation, as well as how he saved the life of a young girl in the Ukraine. 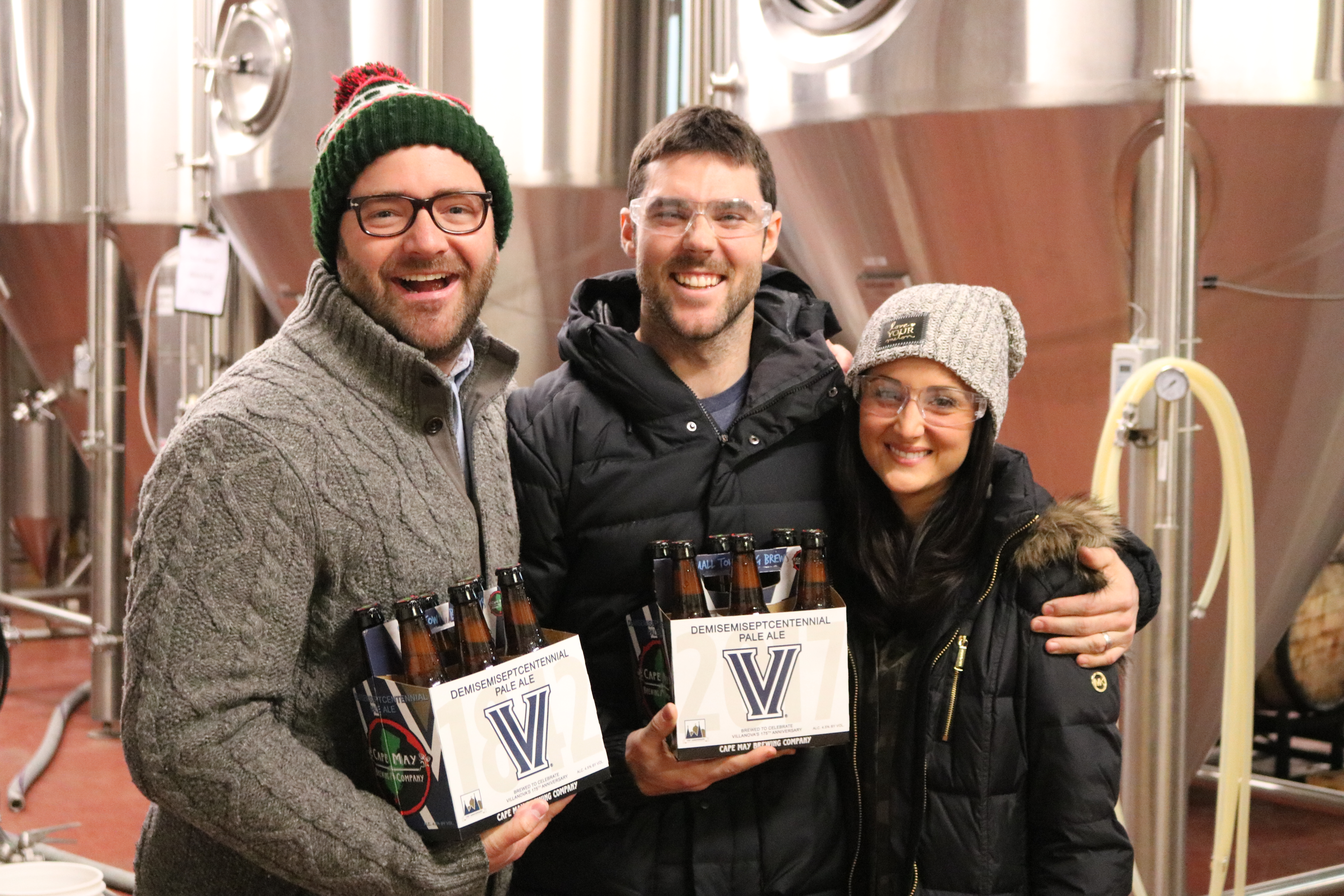 On January 25th, CMBC will be hosting our first Pint Night of the year. We’ve got a great night planned, all to support the Andy Talley Bone Marrow Foundation — an organization founded by Villanova’s former football coach to raise funds, awareness, and donors for bone marrow donation.

Every three minutes, someone in the United States is diagnosed with blood cancer. Affecting over 1.2 million Americans, leukemia, lymphoma, and myeloma account for approximately 10% of cancer diagnoses each year.

For many of those diagnosed with the disease, their one hope for survival is a bone marrow transplant. Bone marrow is the body’s blood-producing engine, and, if it’s producing faulty cells, a transplant will, in many cases, fix the problem. 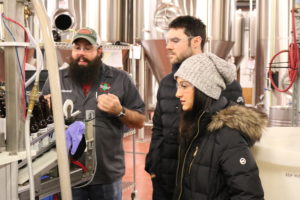 Cubs outfielder and Cape May native Matt Szczur got involved with the Andy Talley Foundation while at Villanova University. The Foundation enlists college football teams to host donor drives on their campuses, and Matt participated in Villanova’s drive.

“To be able to make a difference in not only your life, but somebody else’s life,” Matt says, “I honestly think that if anybody else was put in my shoes, they would have done the same thing.”

Matt proved to be a match for a young girl in the Ukraine named Anastasia. He ended up missing 10 games of the Villanova football season to participate in the donation, just weeks before the Major League Baseball draft. 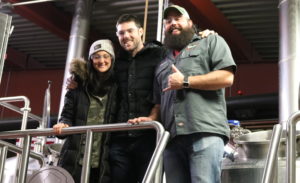 Since then, Matt and his wife Natalie have dedicated part of the offseason to the Foundation, raising awareness and funds for marrow donation.

“I saw the impact I had on Anastasia and her family,” Matt tells us, “and I want people to be able to make an impact like that as well.”

For the second year, Matt is hosting the Szcz the Day Dinner on January 27th at the Cape May Convention Hall to raise funds for the Andy Talley Bone Marrow Foundation, and Cape May Brewing Company has signed on as the official beer sponsor, with Villanova’s Demisemiseptcentennial Ale served in bottles and on tap.

“It’s going to be a great night,” Ryan says. “We were looking for a way to highlight this brew that could include both Cape May and Villanova — and there’s only one name at the top of that list. When we heard about Matt’s work with the Andy Talley Foundation and saw another way for the brewery to be a good neighbor, we jumped at the occasion.”

Matt’s thrilled to have us be a part of it, as well. He and wife Natalie helped us come up with the evening’s one-off: Szcz the One-Off Wednes-Day, Demisemi infused with coconut, pineapple, and orange.

We’ll be helping Matt kick off his Szcz the Day Dinner at the Pint Night. Starting at 5pm, $1 from each pint sold will be donated to the Andy Talley Foundation. 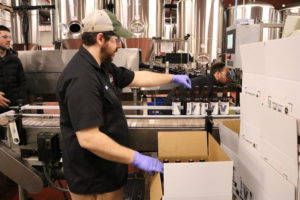 “I hope that the benefit and Pint Night raise money for the Foundation, as well as two local residents currently battling cancer,” Matt tells us. “I’m also looking forward to raising awareness about how easy it is to become a donor and help save a life.”

We’ll be releasing Demisemiseptcentennial Ale in bottles and on tap at the Pint Night, as well. Brewed to mark Villanova’s 175th anniversary, Demisemi has a generous helping of Centennial hops to round out the flavor profile with German Pilsner malts on the grain bill. The result is a classic Pale Ale, easy-drinking and approachable, light both in color and in ABV.

“I’m very excited my hometown brewery is dedicating a beer to my alma mater,” Matt tells us. “Along with my parents, Villanova helped make me the person I am today.”

Matt will be on hand at the Pint Night with representatives of the Foundation to help raise money and awareness. There’ll be donation boxes scattered throughout the brewery, and the Foundation’s staff will be available to answer questions about the Foundation and blood cancers.

“This is an exciting time for us at the brewery,” Ryan says, “with the both the debut of Demisemi and Matt’s involvement with the process. He’s been a great partner throughout this venture.”

Stop down to the brewery on January 25th from 5 to 8pm — meet Matt Szczur, taste Demisemiseptcentennial Ale, and help raise money for a great cause.