"We’ve been looking for a way to be more involved with the Festival, and, with the opening of the Brewtanical Garden, this year seemed like the perfect opportunity to host a few acts in our own backyard."
Exit Zero Jazz Festival, Local Interest

There have been some good things to come from this pandemic, believe it or not.

Early in the pandemic, we were able to pivot to online beer sales, and that’s been a total game-changer. We threw our planned schedule out the window in order to bring you more canned offerings as you were stuck at home during the lockdown. We told you about the changes to this year’s Great American Beer Festival, and we’re thrilled about them.

Across the board, from retail to festivals, everyone’s been forced to think outside of the box, innovating out of necessity, transitioning from how-it’s-done to how-it-could-be.

And many of those changes are pretty awesome. While there’s a lot to dislike about what’s going on out in the world, there are small glimmers of hope and normalcy to be found, if you look hard enough.

One of those hope-glimmers is the Exit Zero Jazz Festival. For years, the festival has descended upon Cape May each spring and fall, bringing the best in jazz, bebop, funk, zydeco, samba, and all kinds of music, sure to get you up and dancing.

And, this year, you’ll be able to enjoy some of that great music in Cape May Brewing Company’s Brewtanical Garden!

Cape May has been known for its restaurant scene ever since The New York Times dubbed us the “culinary capital of New Jersey.” This summer, the island gets one more notch in its cutting board. The Exit Zero Cookhouse at 109 Sunset Boulevard opened three weeks ago — with our Honey Porter as a main ingredient — after much suspense!

Okay, that’s a lie. There was hardly any suspense surrounding the opening of this particular restaurant because owner Jack Wright — a journalist of 30 years and the publisher of Cape May’s peppy Exit Zero periodical — kept it under the radar in case the whole thing turned into a flaming disaster and he needed to go back to his day job with his tail tucked between his legs. (And that’s coming from your blogger who, full disclosure, is Jack’s wife.)

Since the opening, the response has been pretty great. People are loving the menu that Jack describes as “all over the map… in a good way,” and they’re especially loving the Indian lineup, which includes coconut shrimp curry and shrimp Tikka Masala, among others.

So where does our beer factor in?

Along with rich chocolate, the ‘Jersey Fresh’-designated Honey Porter, which is made with 90 pounds of fresh Jersey honey in every 15-barrel batch, contributes to an intensely smoky flavor in the Cookhouse’s super spicy vegetarian chili recipe.

It might just be the spiciest dish in town.

“So far, three people have sent the plate back because they couldn’t handle it,” Jack says. “Half a dozen others have demanded we never change it.”

See where you stand on the polarizing recipe at the Cookhouse, open from 5pm every night but Sunday.

“I’m excited to work with CMBC because I see our companies as brothers from another mother,” Jack says. “It’s important to both Exit Zero and the brewery to be innovative and energetic, and we prioritize community involvement. Plus, Honey Porter is my favorite beer of all time.”

Check out the delivery of our new brewhouse on the cover of this week’s issue of Exit Zero (and inside, too). 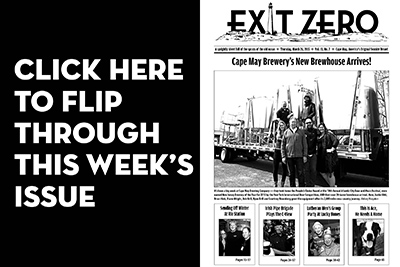 By the way, the brewhouse is being installed TODAY by Andrew (no last name, like Madonna). Here he is below (on the left) preparing for the big job with our guy Hank: 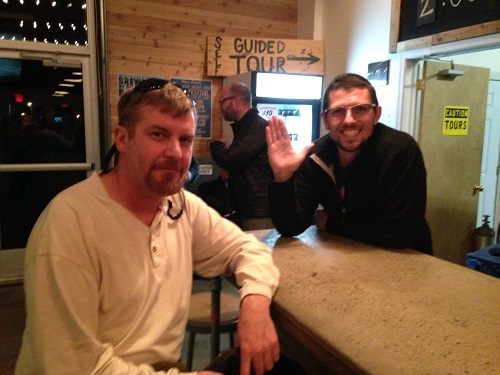