A Year with Jimmy Valm 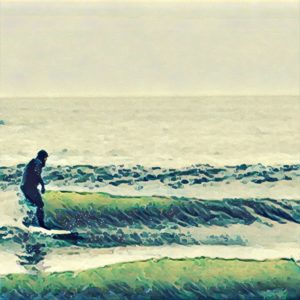 “Towards the end of last summer, it was the swell from Hurricane Hermine, and it was awesome! It was down at The Cove, and these waves were boomin’. They were head-high.”

Director of Brewing Operations Jimmy Valm tells us about his best day surfing in Cape May — he’d already caught the best wave of the day.

“Head high the whole way, and I’m up on the nose, just going down the wave, right up on the nose of my board, and it went like two hundred yards down the face of this wave.

“I get back, and there’s another one coming, and it’s me and this guy Mike — he’s a Cape May native — and him and me are both going for it. And we both get up on the wave, and I’m in front and he’s behind me and I hear him yell something.

“I didn’t know if he said ‘Pick it up’ or if he said ‘Kick out’, because I kinda snaked him. He was on the wave first. So, I kicked out. I just went up and over the back of the wave and just gave him the wave.

“He gets back from the wave — and it was another killer, awesome wave — and he was like, ‘Dude, you didn’t have to kick out! I said “Pick it up!””

The vibe out on the Atlantic that day sums up everything Jimmy loves about Cape May.

“Beyond surfing, Cape May is a really tight-knit community,” he tells us. “People are very friendly and very chill. Part of that comes from surfing and from the brewery, but that vibe permeates most everything down here,” he continues. “You go to the Mad Batter or you go to Five West or you go to Cabanas, and you know the people. You know the guys behind the bar and they know you.

He’s been here a year, now, and we caught up with him to get his thoughts on his first year in the small town with big brews.

Born in Brooklyn, Jimmy grew up outside of Seattle, then moved to Scotland for a degree in Brewing & Distilling from Heriot Watt University. From there, he moved to Manchester, England, as a Brewing Shift Manager for Heineken UK, then back to his roots in Brooklyn with a desk next to Garrett Oliver at Brooklyn Brewery.

How does a guy like that, who’s literally brewed beer all over the world, end up in Cape May, New Jersey? Well… it certainly wasn’t for a love of the Phillies.

“I know it’s just preseason, but Marlins beat the Mets. Dammit!” he exclaims, checking his phone. (We allow him that one character flaw.)

Even though he’d grown up in cities, he’d had plenty of experience in small towns, with family in “Middle of Nowhere, South Dakota,” so he knew what to expect, and it was exactly what he’d been looking for.

He’d been considering a brewmaster position at a “smallish brewery that’s looking to grow.” Luckily, he found that at CMBC. 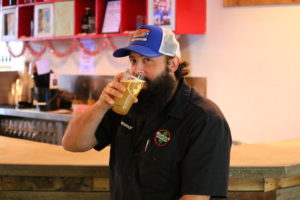 An organization he could grow with — preferably one on the Atlantic with good surf nearby — had always been his endgame. He just didn’t expect it to happen so soon.

“I always thought it would be ten, fifteen years down the road that I’d be able to do that,” he says. “But I thought, ‘Well, why wait?’”

Since we don’t distribute in Brooklyn, Jimmy’d never really heard of Cape May Brew Co. before he’d heard about the position.

“Until moving down here, the only time I’d really spent in Jersey was to go to Newark Airport,” he says. “Or getting through Jersey to get to Philadelphia or DC on the train.”

That’s New Jersey’s lot in life — a place most people suffer through on their way to more interesting locales. That is, until they realize we’ve got some pretty killer beaches, top-notch arts and culture, and a primo brewery tucked away on the southern-most reaches of the Parkway.

Once he’d heard about the position and started doing some research, he realized that CMBC had the keys to success: two involved owners, one with the necessary brewing and engineering background and one with the pertinent business background. (And, of course, Mop Man whistling while pushing a mop.)

He realized — much like Ryan and Hank did — that our guys’ knowledge and know-how was enough to get them to the point where we’d be seeing some real growth. He wanted to be the guy that would help them marshall that growth to the next level.

Nonetheless, Jimmy was a little wary about the “Jersey Shore”. MTV has done us no favors. They deified Snookie and The Situation — seriously, who decides to refer to themselves by a random noun with no real meaning? — and made us all look like fools.

But, thankfully, Cape May is the Jersey Shore’s hidden jem.

“I very quickly realized that Cape May isn’t like the Jersey Shore,” he tells. “The whole Victorian aspect, and its off-season events like the Jazz Festival” keep us from veering too close to fake tans and extreme gym sessions.

On his trip down to the interview, he came down early to check out the town. Even though it was the dead of winter, he and fiancee Margarete walked down Washington Street Mall and found a few places that were still open. They were both charmed by the Victorian whimsy of Cape May.

Then they stopped down to the brewery and had a flight.

“This was me sort of taste-testing the brewery,” he says. “‘How are they doing so far?’”

After sipping Turtle Gut, Tripel Wreck, Mop Water, and our flagship IPA, he was sold. 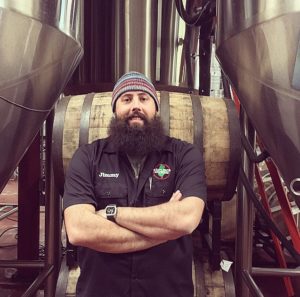 During the interview with Ryan, Hank, and Mop Man, they discussed how we’d gotten to where we are and what their plans are for the future. Jimmy recognized the opportunities there were to expand.

“There were a lot of opportunities to use my knowledge and experience,” he says, “but also to expand on it. This wasn’t a position for me to come in and sit on my laurels, but also to learn even more and expand my brewing knowledge further.”

One of the gaps in Jimmy’s knowledge was souring. He’d had quite a bit of experience with barrel aging at Brooklyn, but sours were just outside his wheelhouse. After sampling Turtle Gut and seeing our sour facility, he knew that he’d get the chance to expand on his already-substantial knowledge.

During the interview, he wasted no time getting to work.

“I remember going through Headquarters, and immediately started working on ideas,” he tells us. “Mainly with yeast husbandry. They were telling me about the cone-to-cone pitching, but they had a yeast storage tank.”

He immediately had ideas on how to improve our yeast husbandry. Cone-to-cone pitching involves directly transferring the yeast pitch from one fermenter to another. You really have no way of knowing what the cell count and viability is, so it’s a bit of a guessing game. He had a few ideas on how to improve and standardize our harvesting yields.

“All we needed to do was get some way to measure how much yeast we’re harvesting and how much we’re pitching and get an agitator to make a homogenized solution, and then I would love to get some sort of cell counter, and that would really, really improve how we make our beer.”

Since then, we’ve put all of those ideas into practice, having brought on our Cellometer, Ceelo, late last year. Now, the yeast goes through a flow meter so we can tell how much we have, and samples are put into Ceelo to check the viability.

“Those projects — the agitator, the second yeast tank, the mass flow meter, and the Cellometer — I like to say that I’ve been working on those projects since I came down for my interview,” he jokes.

He was particularly excited about being in a position where he’d be able to design his own recipes, as well. At Heineken and Brooklyn, he was mainly a facilitator for other people’s recipes, with few opportunities to design his own brews. Now, at CMBC, he gets to design them in conjunction with our Head Brewer, Brian Hink.

“Designing new beers and seeing them come out,” he says. “That’s unbelievably fun.”

His first brew in Cape May was an overwhelming success. Summer Catch — a crushable summer ale — is still the favorite thing he’s brewed since he’s been here. 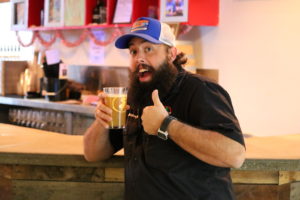 Designing beers is a bit of a crapshoot. Through knowledge and experience, we’ve got a pretty good idea of how things will turn out, but there are so many uncontrollable variables involved that things will sometimes change from concept to draw box. Not huge things — it’s not as if we intend to brew a pale ale and end up with a stout — but minor variations between expectation and reality. Much like life, itself.

Not so with Summer Catch.

“It was the first time I designed a beer that the beer came out exactly what I had in my head,” he tells us. “I could almost taste it in my mouth: this is what I want this beer to taste like. Summer Catch is exactly that. I remember taking the first sip out of the bright tank, I was jumping up and down, I was so excited.”

Summer Catch re-releases on April 20th, so if you missed it last year, you’ll get another chance to find out why Jimmy’s so thrilled with how it came out.

He’s got more up his sleeve that he hasn’t yet accomplished. Jimmy’s very proud of the work he’s done thus far — he points to standardizing our safety program and our standard operating procedures as a few things that are still in the works, close to being complete. Standardization across the board — from yeast husbandry to cleaning the tanks — is going to produce a more consistent product, and your taste buds will thank us.

But as for what the future holds, he plays things close to the vest. He’s been pretty busy since he’s gotten here, attending to things that need to be done now. But now that’s behind him, he can start looking into the future. He mentions things like firming up our quality control and bringing in a lab tech, but as for specific brews, he’s not saying.

“I want to come out with some new recipes,” he says, “but we’ve already got a massive, massive portfolio, and we can always resurrect old ones.

Looking back on his first year, Jimmy’s definitely happy with how it’s gone. He’s working hard, but his stress level is practically nonexistent compared to what it was previously, living in New York.

“It’s fantabulous. It’s been everything I was hoping for, and then some. I’ve got no intentions to go anywhere at all.”

Good news for all of us.