By now, we’ve all heard the truth about the Italian explorer Christopher Columbus, and it ain’t what your second grade school teacher told you. Sure, he sailed the ocean blue in 1492, and that sounds noble enough, but he didn’t 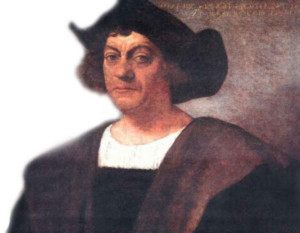 discover the New World… he merely stumbled upon people already living there. When he hit the Bahamas, Columbus thought he’d landed in India, and he misidentified an entire population as Indians. He then led a mass genocide in the Americas, and forced Native women and children to serve as sex slaves. What he gave them in return? Syphillis. The explorer demanded gold, and when he didn’t get it, he retaliated by cutting off hands and noses. Oh, and he helped establish the African slave trade. So yea — just your garden variety megalomaniac with no soul and a fetish for blood.

But although the man is inarguably irredeemable, he did bring something to the New World that makes people happy: lager.

The cold-tolerant yeast that initially made the lagering process possible is actually a fusion of two yeast strains. One is called Sacharomyces cerevisiae and the other, Saccharomyces eubayanus, was a mystery to scientists until recently. In 2011, researchers discovered it in the beech wood trees of Patagonia at South America’s tip. And — drum roll, please — it’s a 99 percent match for what USA Today calls  “the missing link.”

According to this article:

“Somehow, and no one knows exactly how, this New World yeast got to Europe just as the Columbian exchange between Europe and the Americas was beginning. Perhaps beech wood from Argentina was used to make something that ended up in a monastery. However it happened, it made its way to where beer was brewed. And the rest, beer lovers have cause to be grateful for, was history.”

So there you have it – if it weren’t for the sociopath called Columbus we celebrate every October, you might not have your lager. No, this doesn’t absolve the man, but at least it gives you something to think about over your next pint of Oktoberfest.