What’s in a Name?

Have you ever picked up a nickname? Something people start calling you because they’re either mean, or too stupid to remember your real name, or because there are so many Steves in the dorm that it just makes sense to refer to them all by last name?

In middle school, CMBC Storyteller Scott Armato was nicknamed Flipper. No reason. No context whatsoever. Rob Jones just turned around in Mr. Grunwell’s class one day and called him Flipper. Of all things! He doesn’t look like a dolphin. He doesn’t particularly act like a dolphin. No logic behind it whatsoever. It was just a thing that evil middle schoolers began calling him until he decided to own it. “Yeah, I’m Flipper. What up?” If you can’t beat ’em, join ’em. Particularly in middle school.

We here at CMBC have nicknames for things, too. Chris Henke = Hank. But that one makes sense. You have no idea how many Chrisses there are at Villanova.

But what about Mop Man? Or The Shower? Or The Root of All Evil? Or even HQ and OG? We just start referring to things in shorthand… and eventually they get printed on a bottle. It’s kinda cool.

So, this week we decided to find out where those nicknames come from. We know you’ve been wondering. 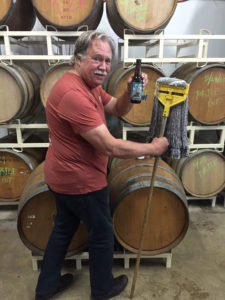 When the guys first opened the brewery, they were sitting around trying to decide what everyone’s title would be. It was decided that Ryan would be president and Chris vice president, but when they asked Bob what he wanted to be, he said he didn’t need any titles. After forty years in the pharmaceutical business, he’d had plenty, so he suggested just being “the mop man.” Five years later, he says, “You gotta watch what you ask for. Sometimes it sticks.”

Mop Man is, of course, a huge fan of the brew that bears his name, Mop Water. There had been multiple requests for a pumpkin beer, but Chris, instead, came up with a five spiced ale. Bob’s first reaction: “Okay, but who’s gonna order Mop Water?” After multiple taste tests, during which the guys wondered, Too much vanilla? and Not enough nutmeg?, Bob finally said, “Don’t overthink it, just drink it!” — which is still printed on the label.

CMBC Graphic Designer and Social Media Manager Courtney Rosenberg relays the story of The Shower: “I was actually beertending at the time, and a dude came in from an early morning kegs and eggs held in North Wildwood, so he was a little tuned up to begin with. He wanted something light — and me being the responsible beertender I was, not high in ABV.” It was a hot day at the Jersey Shore, so refreshment was inevitable. He asked Courtney what she was drinking — an unnamed mixture of Foreshore Shandy (surprise) and Tower 23. This sweaty denizen of the shore was a big fan of The Bog, so they mixed that with Tower 23, and the rest is history. Shandy + Tower = Shower. The original name was “The Dirty Jersey Shower,” but we actually like New Jersey and would never impugn our beloved state in such a way. (At least, not in public.) Try one the next time you’re at the Tasting Room, and thank nameless keg-and-egger. 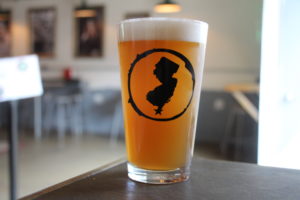 Root of All Evil

One of our regulars, John Thomas, loves to mix our root beer with Devil’s Reach. (Seriously, how tasty does that sound?!?) Not too much root beer, of course — just about 2 oz — then fill the pint glass to the rim with Devil’s Reach. Devil = evil. (And, DUDE! We just realized that “devil” is “evil” with a D in front of it! WTF?!? MIND! BLOWN!) Anyway, since the Devil is evil and it was mixed with root beer, the name becomes pretty self-explanatory. 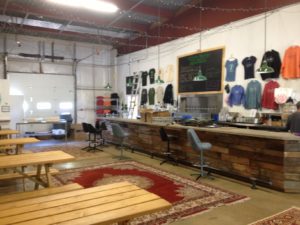 Pop culture rears its ugly head from time to time. After construction on our new building was complete, we needed some way to refer to the two buildings. The new building, since it was filled with computers and technology and all manner of frightening and imposing equipment — and, you know, offices — was definitely to be christened “Headquarters,” but what to call the old building? It was our original location, it had style, some danger, and ballz — it was the Original Gangsta. Since we move fast at CMBC, calling it OG just made everyone’s lives easier.

So, stop on down to OG for a Shower. Mop Man assures us it’s quite tasty, and certainly not the Root of All Evil.