What You Need In Order To Bottle Like CMBC

Part of our ongoing expansion is the incorporation of a bottling line that we’ve been putting together for two years, thanks in great part to the mad engineering skills of our guy Chris. First, he designed the line’s layout in a circa 1999 AutoCAD program (hey, it’s vintage), and then we purchased the system in retro parts. “We were so excited when we got it, because we got it for scrap value,” Chris says. “But then we realized why it’s that way. I’ve spent a lot of time repairing pieces, and figuring out how to connect them all.” 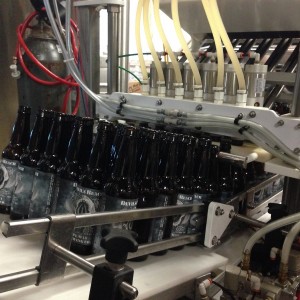 When it’s totally complete and set up in HQ, the action-filled process will look like this:

Bottles start on a depalletizer, or a machine that removes layers of containers from a pallet. (Ours is a circa-1960s “tank.”) From there, they’ll move onto a conveyor belt, then to a labeler, then to a twist rinser (another old-school piece) that sanitizes and removes any cardboard dust, and then to an actual bottler from a now-defunct brewery in Ohio. Here, they’ll be filled, capped, rinsed and moved to another feeder where they’ll be distributed into six packs. The system will be manned by two men.

In the meantime, getting bottles from one station to the next is a manual job. So, until we’re fully up and running (watch this space for updates), here’s what you need in order to bottle like Cape May Brewing Co: