The Nine Things Required To Move A CMBC Fermenter

Yesterday, the fifth and final tank was moved from Cape May Brew Co’s original location to our new space at Cape May Airport. Here’s what it took:

Because there’s no guide book, you need some resourcefulness to rig a 13 foot, 3,000-pound tank so that it can be transported safely the quarter mile distance between our buildings.”We just figured it out,” says CMBC President Ryan Krill. “That’s sort of our motto here, whether we’re plumbing, doing electric work or, in this case, rigging. It’s trial and error.”

Two of them: Big Red and Big Yellow. Ryan uses one to pick up the tank from its eyehooks on top with the help of a boom borrowed from 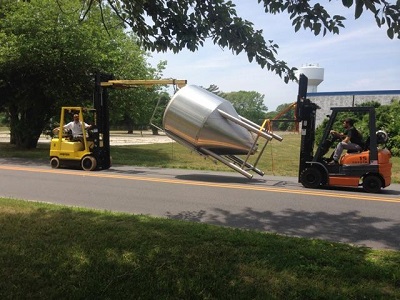 Eckel’s Diesel Service, while co-owner Chris “Hank” Henke uses the other to lift from the bottom. The guys work together until the fermenter hangs suspended like a hammock between them, just a few inches from the ground, with the help of some ratchet straps. “It’s a little like dancing,” says Ryan. “One person has to take the lead and the other follows.”

“I still have all ten fingers,” reminds Facility Technician Carl Hudson, as he works under the suspended tank readying it for transport . “I’d like to keep it that way.”

And we mean brass ones, considering the fermenter costs $25,000. “Moving a tank is a lot like flying,” says Ryan. “Not a lot of room for error, and if something goes wrong, you don’t have a lot of notice.” Adds Chris: “Put a hole in this tank, and we’ve got ourselves a giant new lawn ornament.”

Ryan may have to navigate backwards, but no worries here, he passed his driver’s test on the first go-round. “At the time, I had one of the
new VW Beetles that had just come out and I think the instructor was more interested in my car than my driving,” he says.

“You’re always sweating bullets,” says Ryan. “But we haven’t dropped one yet.”

Moving the last tank is just a little bittersweet. “I am sad to be moving out,” Ryan says. “We really broke our backs building the original brewery. At the same time, it’s exciting to be expanding because it wasn’t that long ago I was working in finance, and I wanted to be here but I didn’t have the balls to make it happen. Finally, I said ‘fuck it’ and pulled the trigger. When I think about that… moving tanks is the highlight of my day.”