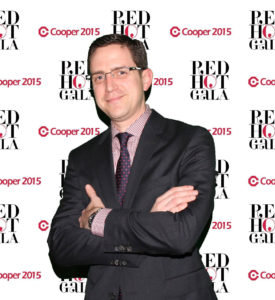 As president of the Guild, Ryan’s had some pretty decent accomplishments. One of those was hiring the Guild’s first full-time Executive Director, Don Russell. Well-known in beer circles as Joe Sixpack, over the summer he decided to return to doing what he does best — writing and writing about beer.

Since then, the board at the Guild has been searching for someone to fill the position. It’s a tough position to fill: we needed someone with fundraising experience, legislative experience, public service… and enough of a beer guy to know his stuff and still be a professional.

We found our guy: Jason Carty.

“Jason is a great choice,” Ryan says. “He loves beer and the New Jersey craft beer scene, so Jason’s the guy to elevate the Garden State Craft Brewers Guild and New Jersey’s craft beer industry throughout the country.”

And, yeah. Jason LOVES beer. Not only did he make an impromptu weekend trip to Belgium in search of beautiful brews, but he actually had a list of his favorite New Jersey beers on his resume. And, man, that’s an extensive list.

“I’m a big fan of the craft beer movement in New Jersey,” Jason says. “It’s some of the best beer around. I’ve been to a lot of breweries near and far, and New Jersey is really putting out a superior product.”

Jason’s been such a part of the New Jersey craft beer scene that Village Idiot named a brew after him. “I don’t know if this is good or bad,” he jokes, “but I won a beer-naming contest. There’s a beer called ‘Evil Boss’ — it’s a bit of a political inside joke. Everybody I know checked off ‘Evil Boss,’ because they wanted the beer named after me. They even put my initials in the logo for it. I love the really boozy, Russian Imperial Stouts, and this is a 13% Russian Imperial Stout.”

Like the rest of us in this industry, Jason’s always had an innate love for beer, but parlaying that love into income took some time to figure out. (Check out our careers page!)

Jason’s done a million things throughout his life, but each time he’s followed his heart. For example, after several years as a corrections officer, he took a significant pay cut to become a firefighter. “It was what I wanted to do,” he says. “I saw the opportunity to work in a field that I’m interested in and that I love. So, why not? It’s a big bonus to work in an industry that you love with people that you like and to be able to help people.”

And his experience will definitely be supporting this cause. He’s got crazy experience in fundraising, public service, and legislation — and we know we need all the help we can get when it comes to working with legislators to update the laws governing production breweries. 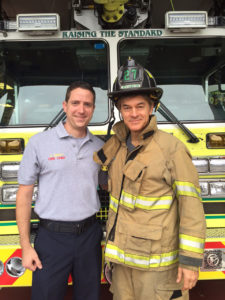 Jason’s got a unique skill set. He spent eleven years as Fire Commissioner and Fire Chief in Mount Holly and Westampton Township. He’s got experience with unions of various sizes — dealing with labor issues, grievances, and contract negotiations. He’s got experience in fundraising and running charitable events — including a St. Patrick’s Day 5K to raise funds for local recreation programs in Mount Holly, his hometown.

And… he was a Coast Guard reservist! You may not know that the Coast Guard Training Center is right up the street in Cape May. So, Jason’s been down to CMBC on several occasions.

“I love Cape May,” he says, enthusiastically. “Semper paratus!”

His career as a Coastie predates CMBC by a few years, but you know that a beer guy like Jason isn’t going to give up a chance for a visit to a new brewery when he’s in the area.

His last trip down here was toward the end of the summer for a weekend, and he stopped on the way in to stock up on The Keel.

“I was impressed by the self-guided tour,” he says. “I thought it was a very smart way to handle the mandatory tour requirement. Having been to so many breweries throughout the state, I think it’s one of the better ways I’ve seen to articulate the beer-making process to the general public.”

In that list of favorite beers on his resume, he mentioned a few of our CMBC favorites, including Devil’s Reach and Salty Lips.

“Yeah, I thought you guys really nailed those styles [Belgian and Gose]. I haven’t had the chance to try all your beers (There’s still time, Jason!), but I’m really looking forward to some of the Barrel Aged Series — I haven’t gotten the chance to pick up a bottle of The Scupper yet, but I think I might know a few people down there now who might be able to save me a couple,” he laughs.

“Devil’s Reach is one of my go-tos. I’ve got it in the fridge all the time, for when I don’t feel like being all beer-geeked out and trying something new,” he says. “It’s a good, go-to, everyday beer.”

At the end of the day, Jason’s glad to be working in an industry he can be proud of, supporting a product he loves. “The product speaks for itself,” he says. “I’ve been to over thirty breweries in the state — from the small mom-and-pop shops to the larger ones — and they’re just putting out a really good product. The medals from the Great American Beer Festival that we’ve brought home to New Jersey speak for themselves. It’s in our backyard — buy local, shop local — but at the same time, it’s a great product, it’s a great industry, it’s a great group of people.”

We’re glad to count you as part of us, Jason.

Jason gets to work next week. If you should run into him on your travels, make sure to buy him a pint. He deserves it.