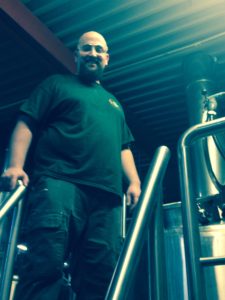 There’s a new brewer at CMBC, and we’re thrilled to have him aboard! Mark Graves — resident of Medford Lakes, he joins us after three years at Manayunk Brewing Company and Flying Fish.

A former band geek, he’s turned that geekery into brewing. He’s been teaching high school marching band in Burlington Township for six years, after having marched professionally in a drum and bugle corps playing trumpet and mellophone, travelling the country for five years.

And take it from us, if you want to know where the party is, always ask the band. Always.

But brewing excited his creative side, while blending it with science. “It was kind of inspiring,” Mark says. “Especially working in restaurants when I was younger, it excited me. All the flavors and intricacies of it.”

The creativity of our brews is what drew him to CMBC. “There’s a lot of variety. There are exciting beers; it’s not the same thing day in and day out.” Personally, he counts Summer Catch and Corrosion among his favorites.

He really liked the people here, too. (We don’t blame him.) “It seemed like there were a lot of young, hungry employees. I really liked the feel of it; how everyone was pushing toward the same goal.”

Mark hasn’t really had the chance to explore Cape May, yet — at least not farther than Big Wave Burritos — but he likes the town thus far. Nonetheless, he has some experience with Cape May Airport: as the grandson of a pilot, he took flying lessons as a teenager. “The runway that they’re tearing up, I landed and took off from.”

A few years ago, Mark made a few stops down to the brewery, back when we were just making the move from our old 12-gallon system to the 15-barrel system. He ran into Ryan and asked him how to get into the industry. Mark took his advice to heart, and we’re happy to see it!

Well, we’re glad you made it back down, Mark! Welcome aboard!