Top Ten Reasons to Line Up for The Keel

#10 — Because you have a deathwish and need to brave tornadoes near and far. (Yeah, CMBC is still reeling from the tornado that ripped through Cape May. Apparently, we’re not in Kansas anymore.)

#9 — Because you’ve been putting off checking out The Brewtique and you just can’t take it another minute.

#8 — Because you’ve decided to skip your sixth Wawa run of the week. You don’t need coffee NEARLY as much as you need The Keel. (Though… that is some damn good coffee…. Okay. We’ll give it to you. There’s a Wawa around the corner. Be sure to pick up something for Justin Vitti or you’ll never hear the end of it.)

#7 — Because if we don’t sell out of this beer, we could stop brewing experimentally. If we stop brewing experimentally, Hank could become bored. If Hank becomes bored, he could start designing satellites again. If he starts designing satellites again, they could contain a death ray. If they contain a death ray, it could mean the end of the world. You don’t want to cause the end of the world, DO YOU?

#4 — Because you want to be the STAR of all of the Fourth of July barbeques. Better max your allowance and get three! 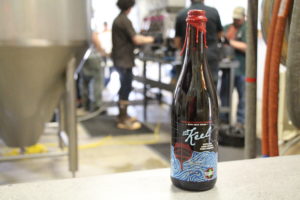 #3 — Because Head Brewer Brian Hink is “more proud of this beer than anything I’ve ever brewed.”

#2 — Because of this bottle. Have you seen it? Look at this thing. LOOK AT IT. It’s GORGEOUS. It should be on a runway. Or hanging in the Guggenheim. The bottle itself is worth $20 — AND YOU GET TO DRINK WHAT’S INSIDE!

#1 — Because this beer took us almost three friggin’ years to get to you. Do you really want to wait another minute?