Weiner means a lot of things to a lot of people. The menu staple at Hot Dog Tommy’s. Adorable puppies doing adorable things. That Congressman who took phallic… selfies. But at Cape May Brewery, “weiner” is what we’ve nicknamed our next release. It’s a Bock — aka Vienna-style lager — and ‘Vienna’ in German is ‘wein,’ so…. you see where we’re going with this. But for formal purposes, we’ve opted for a name with a little more pop culture pizazz — Bringing Sexy Bock — because this is one sexy brew. 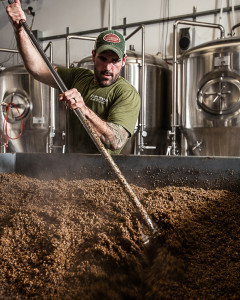 Before we get into all that, a little beer school: a lager is a lager because it’s fermented at a colder temperature — 50 degrees as opposed to 65ish, which would work for a regular old ale. Of course at this cooler temp the fermentation process takes longer, and that’s before you even get to the lagering (ie, cold storage) stage, where the beer sits at 32 degrees for at least six weeks. During this time, it clears itself of any “off” flavors that develop during fermentation. We’re speaking of diacetyl, which is akin to that fake butter flavor you get on movie theater popcorn, and DMS, similar in taste to cooked cabbage. So yea – best to wait those out.

But if you’re willing to hang tight, well, what’s that they say about patience being a virtue?

Bringing Sexy Bock is smooth, clean and malty, with virtually no hop or yeast character. The flavor profile comes instead from a complex grain bill — we use five different kinds instead of the more typical one-two punch (single base grain and single specialty grain for mouthfeel).

The end result is full-bodied; when it hits your lips, you’re transported from Cape May to a broody German beer hall, stein in hand.

The end result is full-bodied; when it hits your lips, you’re transported from Cape May to a broody German beer hall, stein in hand. Just be careful how quickly you down that stein, reminds Brian — because it’s a bock, the brew’s got a higher ABV (6.9%) than your typical lager.

We’re tapping it on March 5, as the third in a six-new-beers-in-six-weeks series. So come check out the weiner in our tasting room, and don’t be afraid to call it what it is, loud and proud — we’ve heard that some of you were a tad sheepish ordering Bringing Sexy Bock by name last year.

But CMB is not usually a place where embarrassment comes easy.

“We like Justin Timberlake around here, but he’s no T-Swift,” says Brian, without a hint of irony. “She’s Chris’ favorite. Personally, I’m a big Katy Perry fan.”

See what we mean?