The Official Blog of Cape May Brewing Company
This week is a “launchpad to reinvigorate Philadelphia’s food and drink community, drawing people back to breweries, bars, and events safely to celebrate as a community.”
Local Interest

Philly Beer Week is a ten-day festival and celebration of beer and recognition of Philadelphia as America’s Best Beer-Drinking City. We’re pretty lucky to live nearby, and we’re fortunate to be included among the incredible brews you can find inside and outside of the city limits year-round.

After the hiatus last year, we’re thrilled to be back, as next week marks the start of Philly Beer Week 2021, from Friday, June 4th through Sunday, June 13th.

Read on to find out how to plan your post-Memorial Day beer ventures in Philly!

Read More
“Philly Beer Week is one of the best weeks of the year.”
Fun & Random

There are a few things that people should know about Philly:

The last one isn’t even up for debate — the Schyukill Punch (aka, Philly tap water) is the scourge of Philadelphia, while the beer in the area is really rather good.

Actually, it’s better than “rather good.” Philly beer is awesome.

Since, down in Cape May, we root for the Phillies and the Eagles and the Flyers and the 76ers, we get to consider Cape May Brewing Company as a part of the great beer in Philadelphia, particularly since you’re able to find our beer throughout the city and the counties beyond.

That’s why, when Philly Beer Week rolls around each year, we jump in feet first. And this year’s festival running May 31st through June 9th is no exception.

Read More
It’s gotten us to change our outlook on everything.
Beer Industry

They say you can’t judge a book by its cover, but in the beer world, that’s exactly what we attempt to do on a regular basis.

When you’re walking down the beer aisle or perusing the coolers in your local shop, we know that an interesting label design is what’s going to pique your interest. If it catches your eye, you’re more likely to pick it up and give it a read.

That’s why graphic design is so important to breweries.

This week, as part of Philly Beer Week, our very own Social Media & Design Alchemist Courtney Rosenberg sat on a panel at U-Bahn, just a stone’s throw from City Hall, discussing Art on Beer.

We know a few things at CMBC. Courtney knows all of the 90s Boy Bands. Mark knows how to do a devastating cannonball. Zack knows all of the lines to the 1992 Disney flop, Newsies. Jimmy and Brian know how to brew some killer beers.

But we all know how to have fun. Thank goodness it’s enshrined in our Core Values at #7.

Last weekend, we closed out Philly Beer Week with a killer event at Heritage in Northern Liberties — our annual Baker’s Dozen.

The freakin’ Hammer of Glory.

We had a blast — as well as some great brews — and some Phish and Grateful Dead tunes from Four Lean Hounds.

Did you miss it? Check out the pictures below!

Read More
Yes, it is Philly Beer Week, but it is also a celebration of community and great beer.
Beer Industry, Fun & Random

The Lowdown on Philly Beer Week

We wanted to get the lowdown on CMBC’s involvement at Philly Beer Week this year, so we got together with our Distribution Manager Justin Vitti, our Chief Celebrations Officer Randi Friel, and our Philly-area Sales Manager Kevin Romer for a little Q&A to find out what’s going on.

How long have we been participating in Philly Beer Week?

Justin: This will be our 3rd Philly Beer Week.

Why do we participate in Philly Beer Week?

Randi: To promote the revolution of craft beer and Philadelphia as a whole.

Justin: To help profile CMBC in a highly competitive beer market and because it is a whole lot of fun.

Kevin: To take the time necessary to celebrate the awesome beer that this region has to offer. Philadelphia is considered one of the premier beer hubs in America, and to be able to showcase our beers during this week is an honor. 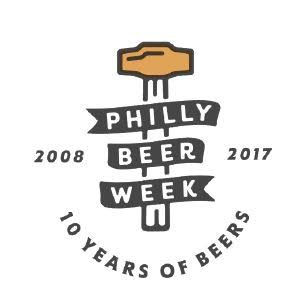 If you’ve ever been to Philly, you may have noticed that Philly likes their beer. It’s a beer town. It’s kinda how they do. There are bars everywhere, and most of them have a pretty decent beer selection.

After all, Ben Franklin was from Philly, and that man looooved his beer. (And pretty much everything else.)

So, that’s why Philly Beer Week is one of the best parties on the East Coast. And this year they’re extending it to the entire year.

Philly Loves Beer — a year-round deal devoted to raising Philly’s profile as a destination for beer tourism — debuts this year. They’ve got education, advocacy, and networking for 365 days this year.

Philly Beer Week took place between June 3 – 12, and CMBC rocked it! We had a blast, ate some pies, drank some pie-flavored beer (yes, it’s a thing!), and we really hope that you guys had fun, too.

We’ve got some pictures of the week, from the Opening Tap at the Fillmore on Friday, June 3 and our pie-eating contest at the City Taphouse on Saturday, June 4. We’ve got some great shots with the inimitable Hammer of Glory — Philly Beer Week’s answer to the Olympic Torch. It winds its way through the city from bar to bar, hammering down at the Opening Tap.

There are a few shots at BarLY, Varga, and the London Grill. Our events were a lot of fun, and everyone loved the brew! (Surprise, surprise….)

Check out the pictures below to see what happened.

Philly is just bustin’ out all over with craft beer. The Craft Brewers Conference was earlier this month, and, just to make sure Philly hasn’t forgotten all about craft beer, Philly Beer Week rolls in June 3-12.

Two major craft beer events in Philly within about a month of each other. One could draw the conclusion that Philly loves beer. (Or you could just go to an Eagles game and figure that one out for yourself.)

Friday, June 3 — It’s the Opening Tap, Philly Beer Week’s official kick off party at the Fillmore. With forty local breweries, live music, and a VIP lounge catered by Whole Foods, the Opening Tap is the place to get the lowdown on the local brews in town this week. The Hammer of Glory will come down at 7pm. We’ll be pouring our Cape May IPA for the event, and our Corrosion Sour IPA will be at the VIP session starting at 6pm. Sounds like you’re going to want to spring for a VIP ticket. Get them here!

Saturday, June 4 — The Irish Pol is hosting an all-day Surf Party, and, as you know, it just ain’t a surf party without CMBC brews! We’re pouring Coastal Evacuation, Misty Dawn, Corrosion Sour IPA, Salty Lips and White Caps, so grab your board shorts and swing down.

Saturday, June 4 — Who doesn’t love pie? (We don’t know, but they’re out there and they must be stopped.) For all the pie-lovers out there — and for everyone who just loves to eat things as quickly as they possibly can — it’s a good, old-fashioned pie eating contest at the City Tap House in University City! In addition, a whopping 18 taps will be featuring Cape May brews. We’ll be pouring our IPA, Coastal Evacuation, Summer Catch, White Caps, The Bog (the only chance you’ll have to catch it in Philly this summer!), as well as a Brewer’s Dozen of pie-themed creations. We’ll have everything from Apple and Blueberry to Pot Pie. Beers are tapped at 11am, pies will be downed from 1-4pm, fun will be had the whole day.

Sunday, June 5 — Check out Hops Over the Bridge at Bar-ly in Chinatown! From 3-6pm, a handful of New Jersey breweries will each take over five of their taps. We’re pouring Cape May IPA, Snag and Drop (first time in Philly!), White Caps, Summer Catch, and Concrete Ship (ALSO the first time in Philly!).

Monday, June 6 — It’s a Battle of the Beaches at Varga! CMBC will take on Evolution Craft Brewing Company from Salisbury, MD. Not only will our brews be battling it out, but you can join the sandcastle-building battle, and oysters from the two states will throw down, as well! Cape May Sea Salts vs. James River Oysters? Please. You know we’re winning this one hands down.

Wednesday, June 8 — Get over to the London Grill from 4-7 for Down By The Sea. We’ll be pouring Salty Lips, Coastal Evacuation, Misty Dawn, and our Cape May IPA on Nitro. We’ll also be serving generous amounts of Cape May Sea Salts.

So, head to Philly next month and plan your next meetup with one of these events. You’ve got a whole week to plan ahead!