The Official Blog of Cape May Brewing Company
“Like going home.”
Beer School

What Folks are Saying About Mop Water

The days are shorter. The weather is cooler. The clocks have done their magic changing thing and the leaves are making their descent.

All signs of one thing: autumn is here.

However, if you ask any Cape May Brewing Company fan out there, there’s one portent of the fall that the poets always seem to miss: the triumphant return of Mop Water!

While it’s a little late this year due to the aluminum can supply issues that have been plaguing our industry, Mop Water returns to our Tasting Room this Friday, with New Jersey distribution planned for November 9th, and distribution throughout Pennsylvania and Delaware on November 16th!

Read More
We’re thoroughly excited about 2020, and we hope you are, too!
Brewery Buildout

Read More
It’s still receiving wide distribution on draft; however, it will only be available in 12-ounce cans through our Tasting Room.
Beer School

Regardless of what the thermometer might say, autumn is here!

It’s still pretty hot in Cape May — and, indeed, just about everywhere with sunlight — but, rest assured, the people in charge of such things have confirmed that the hours of night exceed the hours of daylight and the leaves on the trees are slowly draining of chlorophyll and will be dazzling us with their rainbow of reds, yellows, and browns and beginning their annual plummet to the ground to be gathered into jump-inviting piles in short order.

Nonetheless, it feels like summer has been even longer than the preceding sentence.

Yet, as we ready ourselves for the inaugural Pick of the Batch Beer Garden, we know that cool days and crisp nights are in short order and bring with them all of the wonderful things we love about fall.

And, of course, that means the return of our fall-favorite, Mop Water. 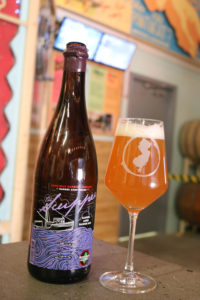 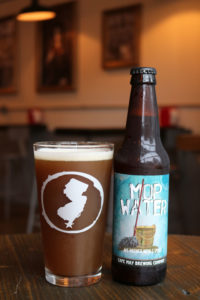 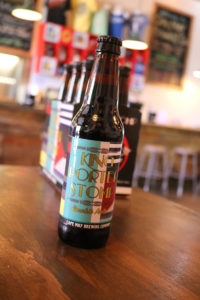 I Know What You Did Last Shandy and…?

If you missed I Know What You Did Last Shandy when it was out last year, no worries! It’s on tap again in the Tasting Room.

This killer shandy stands just fine on its own. It’s practically a liquid dessert: flavors of cinnamon, clove, and a ton of brown sugar swirl around your glass, enticing you with its aromas and flavors.

Nevertheless, this is the perfect beer to blend with some of our other brews. We’ve got some ideas for you for your next trip down to the brewery.

Mop Water — The spices in these two brews will complement each other nicely. Both have cinnamon, but the nutmeg, ginger, allspice, and vanilla in Mop Water will play beautifully with I Know What You Did Last Shandy. Furthermore, the dryness of the German malts in Mop Water’s brown ale are just begging to be sweetened a bit with a shandy. Give it a whirl!

Apple Bomb — There’s literally nothing more American than apple pie. Ask your grandmother for her apple pie recipe, and if she doesn’t mention cinnamon and brown sugar… ask your other grandmother. Combining I Know What You Did Last Shandy with Apple Bomb will leave you wondering who smuggled a slice of apple pie into your pint glass.

Avalon Coffee Stout — Who doesn’t love some spice in their coffee? If Starbucks’ next big coffee drink is some combination of coffee, cinnamon, cloves, and brown sugar, we’d assume that they got the idea from a brewery in Cape May. The grain bill of pilsner, carafa, caramunich, roasted barley, and oats with the nutty and cocoa notes of Avalon’s house blend will pair beautifully with I Know What You Did Last Shandy’s spicy sweetness. Yum!

Honey Porter — The roasted and dark crystal malts and characteristic sweetness of our flagship Honey Porter practically implores you to add a bit of spice to the mix. Cinnamon, cloves, and honey play wonderfully together, while the brown sugar brings the malts to the fore. This is where tradition and innovation converge!

Devil’s Reach — The fruity simplicity of our flagship Strong Belgian fares well against the complex sweetness of I Know What You Did Last Shandy. The fruity esters and unbearable lightness of Devil’s Reach are spiced up considerably by the cinnamon and cloves in the shandy. And that brown sugar all over those fruits? It’s like an apricot jam or orange marmalade on a cinnamon raisin toast first thing on a cold winter morning.

Do you have other ideas? Come on down and try them out!

What People Are Saying about Mop Water

It’s back! Mop Water — the brainchild of Mop Man himself — is anticipated patiently by CMBC’s loyal fans each fall. This year, we’re getting a jump on this five-spiced ale and releasing it a little earlier! It’ll be coming at you September 1st, just in time for Labor Day.

Take a look at some of the great things people have to say about Mop Water.

“It’s a really unique pumpkin beer — although it’s not a pumpkin beer and that’s what makes it so unique. We decided to bring in all the best parts about pumpkin pie: you’ve got cinnamon, nutmeg, vanilla, allspice, and ginger in there. It’s all the best parts about pumpkin pie in a really rich, full-bodied, amber beer. The beer before the spice is delicious. That’s what really sets it apart. A lot of people just make a basic, boring beer, then add spice to it. We didn’t want to go that route. We made a good beer first, then complemented it with spices. It’s just a really unique fall spiced beer.” — Brian Hink, Head Brewer, CMBC

“Pours deeper amber with a light tan head. Aromas of cinnamon, nutmeg, caramel, and tree bark. Smooth and drinkable with nice carbonation. Cinnamon, vanilla, nutmeg, caramel, sugar cookie, and a full finish. Spices don’t overpower this beer at all! Really drinkable and balanced. Digging this shit…even if it is mop water.” — eelbasher, RateBeer

“It reminds me of fall, so it’s my seasonal beer — it makes me think of Halloween and haunted hayrides. It’s one of those beers that, when you’re watching American Horror Story, you can pair it with any fun fall food, and have people over and say, ‘Hey, let’s do a flight of all things autumn.'” — Courtney Sands, Beertender, CMBC

“Pretty good stuff–the spice combination is interesting, works well with the brown malt and vanilla to create something truly unlike its name. It’s one of the more ambitious and unique NJ beers, for sure.” — ectuohy27, RateBeer

“I love the s-load of real vanilla that goes into Mop Water.” — Hank, our boss, CMBC

“Poured a muddy deep brown with an average-sized light beige head. Aroma is malty with dark toast and brown bread along with some nice spicing: mostly cinnamon with a touch of nutmeg. Flavor is the same as the aroma with some nice cinnamon and nutmeg over toast and grains. Really nicely done and not a spice bomb, just the right amount to easily detect but not overpower.” — dmac, RateBeer

“I like Mop Water because it’s not a pumpkin beer.” — Richie Rallo, Sales Manager, CMBC

“Spices blended into a creamy ale. Loved it! Christmas to Summer, hints of vanilla and cinnamon. A+!” — Ryan B., Untappd

“The Mop Man made it!” — Maddie Macauley, Beertender, CMBC

“Murky brown pour with a large soapy off-white head. It does look like dirty mop water. Tastes surprisingly juicy. Lots of spices: Nutmeg. Cinnamon. Cardamom. Allspice. Tasted like a pumpkin beer at first but apparently that is due to a large amount of vanilla bean. Caramel pudding. Butterscotch. Watery mouthfeel, so the moderately high ABV is well hidden.” — NikkTwist, RateBeer

“Mop = swab. Bucket = cadillac. Wall = bulkhead. Recruit, take that swab outta the Water in the cadillac & bring me a beer! Swab Water!” — Woody C., Untappd (Blogger’s note: We have no idea what this means.)

Why Drinking Mop Water Is Like Riding A Wave…

If you haven’t noticed, we’ve been on a bit of a surf kick this week, which is perfect, because if our upcoming release — the toasty, spicy, herbed brew we call Mop Water — were a sport, it would be surfing. The comparisons are endless! Okay, the comparisons are five. Read them while you wait for the beer, coming at you October 9.

Surfing conjures up images of bronzed nubiles thrusting down the glassy faces of unbroken swell – sexy. Mop Water is brewed with cinnamon, nutmeg, ginger, allspice, and a ton of whole-bean vanilla – also sexy.

At least, surfing is supposed to be smooth… if you’re pumping down the line like a defective jack hammer, you’re doing it wrong.  The German malts used in Mop Water lend a smooth and creamy,  totally rad, mouthfeel.

Hesitate in surfing and you either get sucked over the falls or drilled in the impact zone. At 7.3%, Mop Water requires commitment, too. This is not a beer for the faint of heart. Or the low in tolerance.

Surfing has a way of sucking you in, so that you find yourself paddling out even on days when the ocean is an angry washing machine. Mop Water’s been responsible for a few cravings as well. And unlike most spiced brews, this is not a one-hit wonder; you can keep coming back for more every fall and winter.

Kelly Slater. Mick Fanning. Steph Gilmore. Surfing is a sport with no shortage of idols. Mop Water is the brainchild of CMBC’s co-founder, resident Mop Man, and legend in his own right, Bob Krill.

Drop in (pun intended) to our tasting room beginning this October 9, and see if you can’t come up with a few more reasons for nose diving into a pint…