The Official Blog of Cape May Brewing Company
“We’re looking for Lacto and Pedio.”
Brewery Buildout

We’ve definitely got some fun toys at the brewery.

That new canning line is awesome — it makes canning beer so much faster. Our centrifuge is pretty cool, too — it gets the beer cleaned up, looking pretty, and tasting fantastic. Innovation Director Brian Hink gets to have a lot of fun with our pilot system, developing tasty new beers for you fine folks, and our beer engine opened up a whole world of new beers to try in our Tasting Room. Even Craig and Polly probably have a lot of fun on our forklifts.

Yet, we’ve got a tiny, little room off to the side of the brewery floor that you might not notice if someone doesn’t point it out to you, and the most fun — and expensive — toys in the brewery are in there.

That’s our lab. And Lab Manager Lauren Appleman spends her days cooped up in there, playing with those awesome toys.

And she got a shiny, new toy over the past few months — okay, it’s not shiny — but her new Gene-Up from bioMérieux is making it easier for her to ensure that each can that leaves our warehouse is of the highest quality.

Read More
“We really let the hops and Brett shine,” Lauren says, “and the bit of oats give the whole thing a pillowy mouthfeel. It finishes really dry, but to start off, it’s very fluffy, you might say.”
Beer School

Over the past several months, we’ve tasked the folks in production to devise recipes as departments. The cellarmen gave us Maize Haze, the guys in packaging gave us Baddest Cat in the Whole Damn Town, and now the lab has had the chance to devise Aiding & A’bretting.

It should come as a surprise to exactly no one that Lauren and Matt in the lab used their science background to their greatest advantage in devising their brew. It’s not exactly out-of-the-ordinary to do a 100% Brettanomyces-fermented brew — we have Crusty Barnacle in our lineup, but that’s one that if you don’t catch while it’s here, you’ll miss it.

“It came and left in, like, a week-and-a-half,” Lauren says.

So, with a record like that around here, another 100% Brett beer was certainly a welcome addition.

Read More
Women in brewing is certainly not a new concept. In fact, beer was originally brewed by women.
Beer Industry, Fun & Random 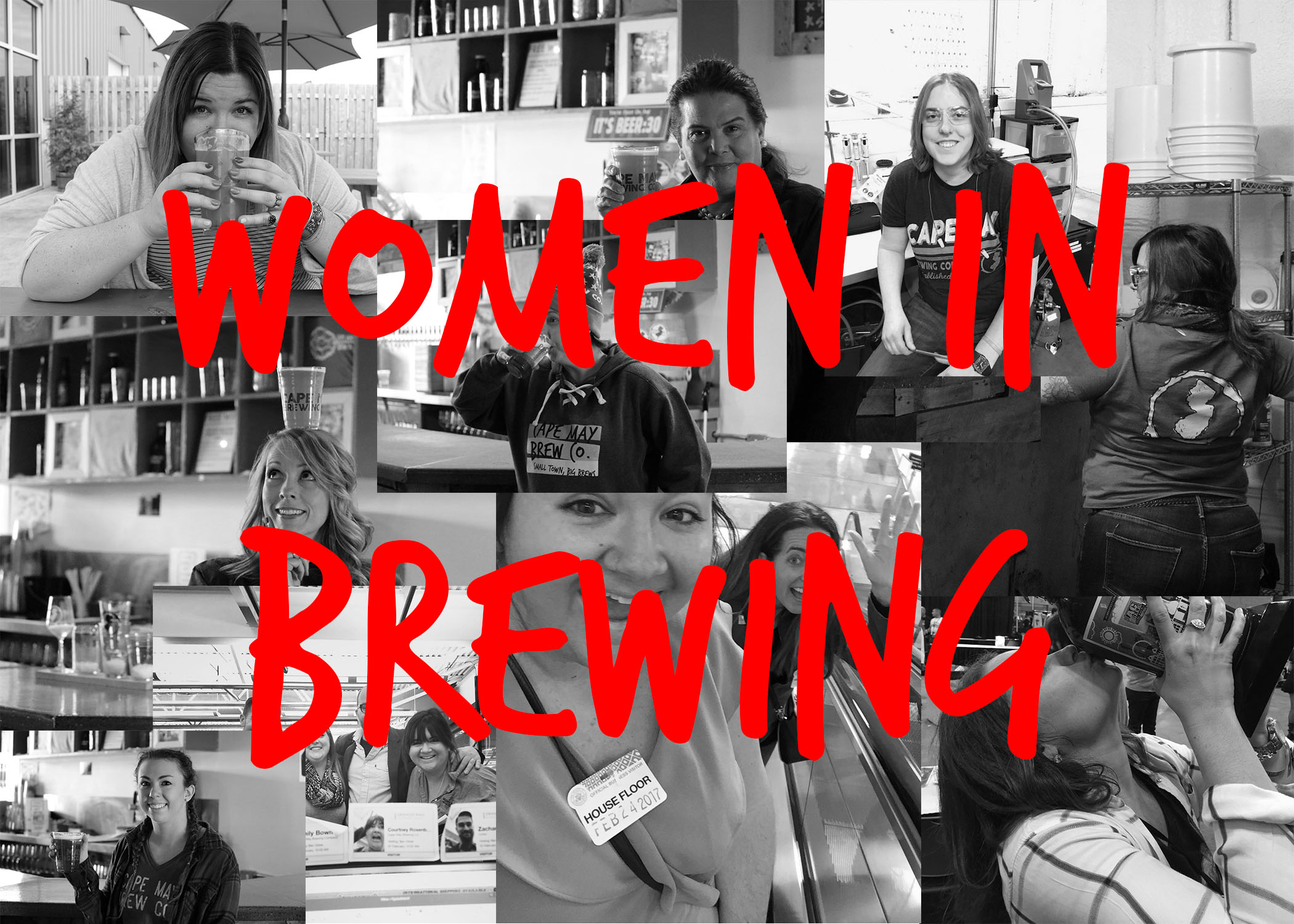 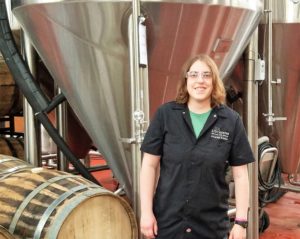 Here at CMBC, we’re all about making dreams come true. You know, like Ryan, Hank, and Mop Man’s dream of opening a brewery that makes them proud. Or Jimmy Valm’s dream of living a life of surf and brew. Or Brian Hink’s dream of working at a place where they didn’t care about the length of his beard.

Add another one to the list. Welcome aboard Lauren Tomaszewski, our new Lab Technician!

We’d met with numerous candidates for this position, and it took us awhile to find someone who would be a good fit. We knew the role would be starting off small, but would be growing as the company grows.

“We have been focusing on finding someone with enthusiasm and drive as well as a personality that fits our culture here,” says Director of Brewing Operations, Jimmy Valm. “When Lauren told me her story about how she got into the craft industry and the path she’s taken, I knew we had found our match. After I sat down with her and Ryan and Hank, we all agreed that she would fit right in and be a great benefit to ensuring we’re making the best beer possible.”

Lauren graduated from Kutztown University in 2013 with a degree in Biology with a specialization in micro-, molecular, and cellular biology. While there, like most college students, she found a love for beer. And, thankfully for us, she found a love of good beer.

Living about five minutes away from Tröegs, she stopped by there after she turned 21. She walked by a room filled with beakers and Bunsen burners and flasks and thermometers and had the realization that breweries needed scientists, and she realized what it is she wanted to do with her life.

“I said, ‘Oh, wow! This is something you can do?’” she tells us, “But I kinda fell into that circle of, ‘You need experience to have a job, but how do you get experience if nobody will hire you?’”

So, she enrolled in the brewing program at University of the Sciences in Philadelphia. There, she got a wealth of hands-on experience in brewing science, with classes in engineering, microbiology, quality control, and the basics of brewing — which is more-or-less what we were looking for in this position.

While at USciences, Lauren did an internship with our good friends over at Weyerbacher. She did a lot of the things we’re looking to do here, including some media plating. She runs the beer through a paper disk, catching the little yeasties.

“That’s more of the classical microbiology,” she tells us. “You put it on the petri dish on the agar, a nutrient base for whatever you’re putting on there. So, if it’s there, it’ll grow, after incubation.”

The position here will consist of checking gravities, temperatures, some pH tests.

“A lot of the BrewPal System.”

“The BrewPal system is basically a pregnancy test for lacto and pedio — two beer spoilers,” she explains, patiently. “You take your samples, run them through a PCR, which is going to amplify for the hop-resistant gene. You drop it in there, pull down the window — two lines is bad, one line, you’re okay.”

Lauren is also planning to do Tasting Panels for the staff, instructing them on how to identify off-flavors in our beer. We’re not yet sure of how often she’ll be running these panels, but Lauren recognizes the need to do it fairly frequently to keep everyone’s palate up-to-snuff.

Apparently, there are companies out there that sell tablets that allow you to dose the beer with a certain amount of the off-flavor, so you could build a continuum of off-flavors: this one has a little, this one has a little more, a little more, so on up the line. This will allow our guys to determine where the threshold levels are in their own palate.

“I can kinda add my own flair to it,” she says.

Believe it or not, Lauren’s actually hoping that she won’t have much to do around here.

“If I don’t find anything, it means you’re doing a great job!” she laughs.

We’re particularly glad to see a woman in this position. Through no fault of our own, it’s pretty testosterone-heavy in the brewhouse: only about 10% female. Brewing is a relatively male-dominated industry, so we’re pleased to see Lauren back there, particularly in a STEM-related occupation.

When asked about it, Lauren brushes it off. “It doesn’t really bother me at all,” she says. “Hanging out, we get along, so it’s not a big deal.”

Lauren grew up in Palmyra, PA, just outside of Hershey. A hockey fan, she roots for the Hershey Bears and, by extension, the Washington Capitals.

“That probably doesn’t get me a whole lotta love here,” she jokes. “I’m used to it. My fiancee is a Flyers fan.”

Together for over five years, they’ve just moved to Mays Landing. “It was a lot at once,” she says.

Her first day was Monday, and it was only her third time to Cape May. “It’s very nice.” She’s looking forward to our sour brews, a big fan of Turtle Gut and Corrosion. And even though she went to Kutztown, she’s really digging the Demisemi.

“I’m just happy to finally have a job,” she says. It’s been a long journey for her to realize this dream, and we’re glad to be part of it.

If you happen to catch Lauren around the brewery, be sure to say hello. Welcome aboard, Lauren!