The Official Blog of Cape May Brewing Company
Beer Industry 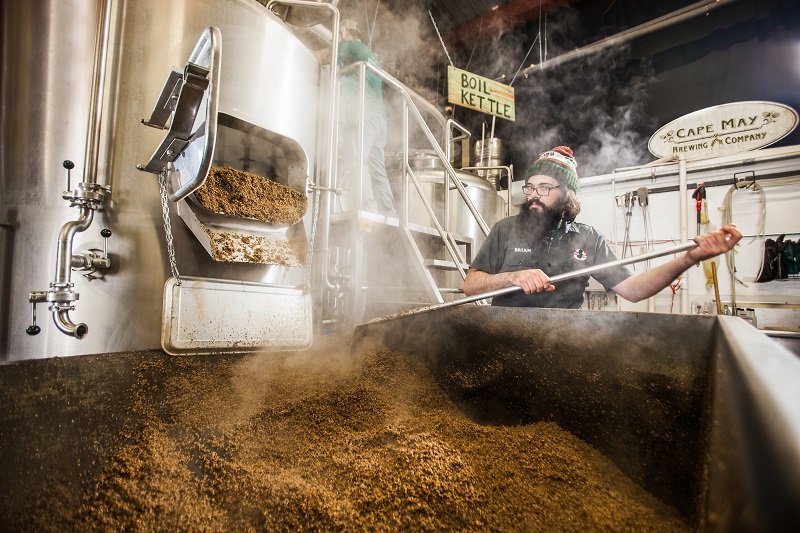 One might wonder why our brewers work in craft beer. There are big breweries out there with bigger names and even bigger followings. Why would they choose to throw in their lot with an independent craft brewery in Cape May?

(For our purposes, let’s ignore the response of “integrity”.)

Our guys have said time and again that they don’t want to be doing the same thing over and over and over until their eyes bleed. And at one of those big guys, that’s pretty much what they’d be doing: forced to live a life stripped of creativity and passion, shovelling the same amount of the same malt into the same vessel for eight hours a day for forty years — because that’s what fans of their product expect of them.

We certainly don’t mean to knock the guys who do it. It’s a job — and it’s a good job. We’re just glad that our weekly beer allowance has a little more variety than choosing between two six-packs of Swill or one of Swill and one of Swill Lite.

That’s where our Geek Out series comes in.

“There aren’t any expectations for it,” says Head Brewer Brian Hink.

We’ve explained a few times how craft beer works: there’s a lot of finger-crossing and wood-knocking and rabbit’s foot-rubbing and hoping and praying involved. Our guys have a lot of experience and knowledge that lets them generally know how a recipe is going to turn out, but there’s always an element of the unknown — particularly when you’re dealing with new ingredients and a living organism (yeast) that can be finicky at times.

So, we wanted to have a series that would let us answer the question, “What if?”

As Brian puts it: “Cape May IPA is Cape May IPA and has to stay Cape May IPA. We can’t throw new hops at it, or use a different yeast strain for this batch or new malt bill for that batch — it wouldn’t be Cape May IPA at that point.”

The Geek Out Series will let us, conceivably, throw new hops at an old favorite. Or a different yeast strain. Or a new malt bill.

“We can do whatever the hell we want with them,” Brian says, “which is where it gets really exciting for us.”

Brian designed the first Geek Out as part of our Employee Series back in 2013, back when he’d just moved into production and was still homebrewing like a madman. Like most homebrewers of a certain ilk, Brian liked to push the boundaries of beer.

“I loved playing with different yeast and hop combinations, especially Belgian yeasts,” he says. “I always thought they paired perfectly well with the newer, fruitier hops that were coming out at the time.”

So, in an attempt to be as beer-geeky as humanly possible — perhaps even exceed those worldly bounds — Brian threw as much as he could at his first Geek Out attempt.

“I had the fun idea to soak oak cubes in white wine and add them to a Belgian rye IPA with Nelson Sauvin hops, which naturally have a white wine-like presence to them,” he tells us.

Let the absurdity of that sink in for a moment:

That’s barely beer. It’s something you might expect from the laboratory of a mad scientist, cackling, with flashes of lightning and peals of thunder in the background.

“It was a little disjointed and a touch messy,” Brian admits.

And, thus, Brian’s Geek Out was born.

For production, we replaced the white wine-soaked oak cubes with white wine juice — which is the base of what might eventually become a white wine. We’re not allowed to actually add white wine to the brew — though, if we were allowed, Brian probably would have done so.

At the time, Nelson Sauvin hops were — and still are — nearly impossible to source on a large scale. We’re lucky to recently have the ability to get them under contract. Back then, we got an experimental hop with similar attributes.

The following year, he’d been brewing a whole year longer and had learned a thing or two about restraint. He was determined to bring back Brian’s Geek Out, but he’d wanted to refine it a little.

“I took the parts I liked best and refocused my efforts,” he says.

For 2.0, Brian kept the rye in the malt bill for body and mouthfeel, but dropped the ABV way down to 5.5%. We somehow were able to get our hands on a box of Nelson Sauvin hops — which is why we did 2.0 to begin with — so we ditched the white wine juice and experimental hops in favor of a dry-hopping of Nelson and Citra.

“The result came out exactly as I had hoped it would,” Brian says. “I was super pleased with the refocused effort.”

In 3.0 — released just last month — Brian played around with El Dorado hops, a new hop for CMBC. The decision to release it under the Geek Out series was a bit obvious.

“We wanted to play around with a new hop for us, El Dorado, but didn’t want to give it a throwaway name that we’d use once and then toss to the wayside, as we’ve done many times before,” he tells us. “We were trying to come up with a name for a series of beers to experiment with, something we could build a brand around, and when we realized we still had Geek Out as a registered brand it became a no-brainer to use that as the name for this new line of beers.”

And, thus, our Geek Out Series was born.

You’ll definitely be seeing more from this series. Geek Out 3.1, a Bretted version of 3.0, released this week, and 4.0 is slated to be released June 8th.

“It’s been about two years since Geek Out 2.0 came out so, in 4.0, I’m going to revisit that recipe with a couple tweaks to it, of course,” he tells us.

Geek Out 5.0 comes out in July. In it, Brian and his good friend Brett N. Omyces (get it?) will be playing together once again.

The Geek Out Series is not a “regular” series — meaning, don’t look for a new one every month, or every six months, or what-have-you. We’ll be coming out with new ones as Brian and the guys come up with experimental recipes. Honestly, knowing these guys, that could be weekly.

And it’s possible that you may see a previous Geek Out release being re-christened as a seasonal offering. If, for example, Geek Out 6.0 is well-received enough that we want to do it again outside of the Geek Out series, it could end up being re-named and re-released. Who knows?

No one knows, and that’s the point. Geek Out is the unknown. That’s the entire idea behind this series: sort of a gigantic shoulder-shrug in the direction of craft beer. It is exactly the opposite of shovelling the same amount of the same malt into the same vessel for eight hours a day.

And you, dear beer drinker, get to reap the benefits.