The Official Blog of Cape May Brewing Company
It sounds like a hoot!
Brew Crew, Escape the Cape, Fun & Random, Local Interest

Escape the Cape weekend is a big one in Cape May. Several thousand competitors descend upon our fair town, biking, running, and swimming in some of the most beautiful terrain you’ll find in competitive triathlons.

We’re thrilled to be part of it each year, brewing a special beer — Escape the Cape — to mark the occasion.

This year will be truly something special — three members of the Brew Crew have agreed to run a relay team for us! We got together with Paul Greer, Lauren Frech, and Caitlin Gard to get their thoughts on swimming/running/biking their leg of this award-winning triathlon.

Read More
We were hoping that we could find someone at the brewery to take the plunge and run the full triathlon, but we couldn’t find anyone that determined.
Escape the Cape, Fun & Random, Local Interest

However, if it’s something you’ve been wanting to do with 1,750 of your now-closest friends, followed by a five-mile run along the North Cape May beaches, then a ride on your trustiest bike for 23 miles, you should probably do so as part of one of the best triathlons in the nation: Escape the Cape.

Because, if you’re a competitor, you get to attend a killer after-party and sample one of the most refreshing beers you’re likely to find: Escape the Cape.

Read More
“Why would I want to escape this? Solid!”
Beer School, Escape the Cape, Fun & Random

It’s our fourth year sponsoring DelMo Sports’ insane triathlon, Escape the Cape, which sees its nearly 2,000 participants plunging off the back of one of our iconic Cape May-Lewes ferries.

That also means that it’s our fourth year brewing Escape the Cape Pale Ale. It’s brewed with assertive and exotic hops and fermented with our house Lager strain, but its wake-up punch of hops hits you right in the face with a strong hop aroma and little bitterness. It’s crisp and dry, ridiculously refreshing, and perfectly sessionable.

It’s what everyone is looking for when they cross the finish line.

We decided to check into Untappd to see what everyone had to say about last year’s brew. 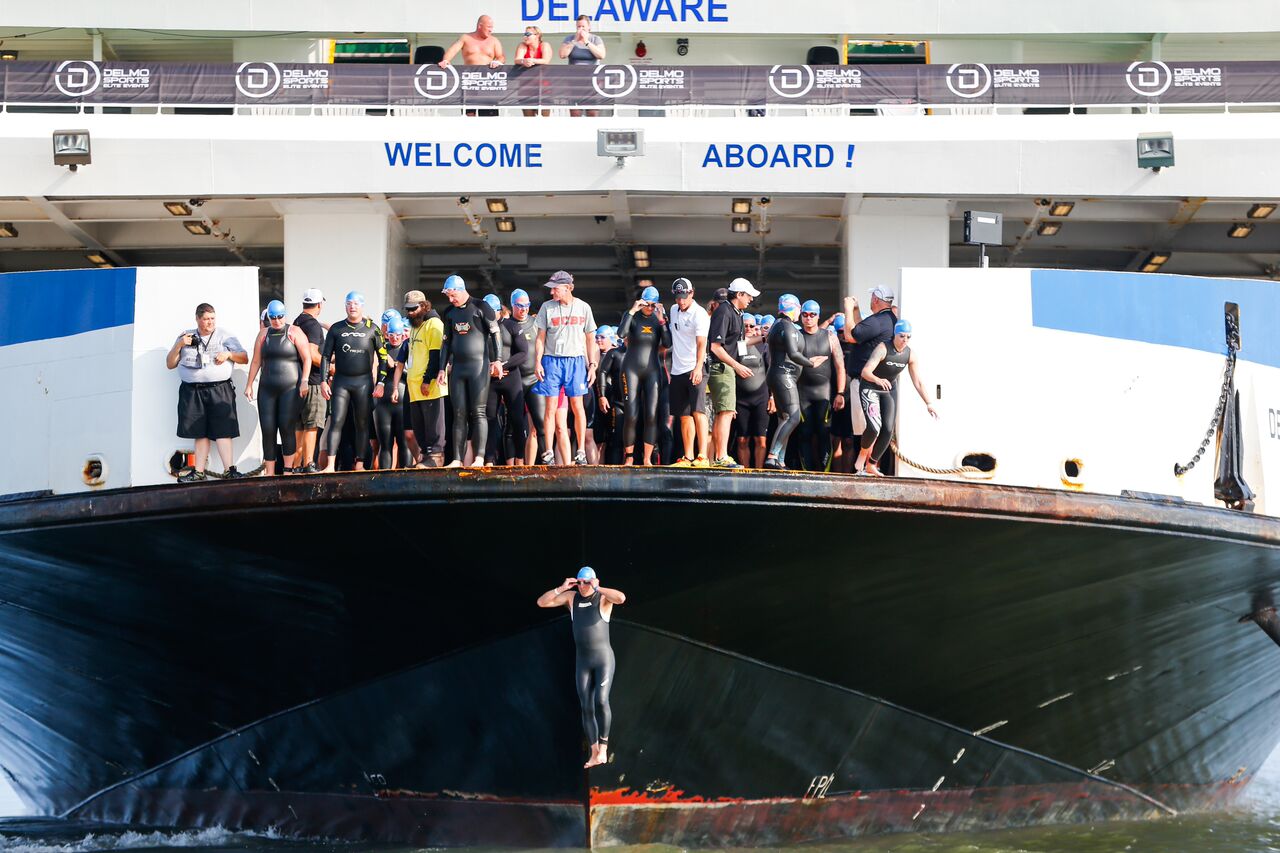 Generally speaking, when you’re riding the Cape May-Lewes Ferry, you’re asked to remain aboard the ferry until it has docked safely at your destination. That’s typical ferry-riding etiquette. It’s safe, it’s sane, it’s… what normal people do.

Unless you’re one of the 1,750 people participating in Escape the Cape.

On Sunday, June 12, this award-winning triathlon commences with the entire group of participants plunging into the Delaware Bay from the back of a ferry. To say the least, it is an evocative moment.

Colleen has been running seriously since 2012, training for triathlons by adding biking and swimming to her usual running routine. She’s run some pretty hefty races since then — Ironman, anyone?!? — and can’t wait to take the plunge for Escape the Cape.

“I’m excited to jump off the ferry!” Colleen says. “That just seems like the coolest thing, and the most interesting way to start a triathlon ever.”

It’s all done safely in stages — 1,750 people all attempting to dive off the back of a boat simultaneously could result in multiple injuries — and the last thing you need is a competitor jumping on your back before a triathlon. “It seems like a pretty amazing thrill,” Colleen says, “and certainly not something you get to do every day. I’m not remotely scared about it or nervous, just excited!”

This year’s race involves competitors swimming a mile, biking 25 miles, and running five miles. Let that sink in for a moment. Most of us don’t even like driving 31 miles — these people do it under their own power… for fun.

CMBC is the official beer sponsor of the race. “How could we not support something like this?” Ryan asks. “The sheer insanity of it all puts it right up our alley.”

CMBC’s prez, an avid biker himself, was all set to participate in the race two years ago before falling victim to a run-in with a razor blade and some zip ties while installing a projector.

“And it gives us an reason to brew a special beer.” As if we need a reason.

Brewed with assertive and exotic hops but fermented with our house lager strain, Escape the Cape Pale Ale is a straw-colored, lager-esque ale, crafted to appeal to beer drinkers yet be invigorating enough to sip after a running a triathlon. This brew has a strong hop aroma with little bitterness: crisp, dry, and poignantly refreshing.

“I love to have a beer after a race,” Colleen says. “Not immediately after, but after a race, a beer is just so cold and tastes better: probably similar to tasting better on a beach. Maybe it’s the warmth contrasting with the coldness?”

“Our #1 focus is the athlete experience,” said Stephen Del Monte, Founder and CEO of DelMoSports and Escape the Cape Race Director. “Athletes will get to do things at this race they can’t do anywhere else, like jump off the Cape May-Lewes Ferry and enjoy a custom-brewed race beer by Cape May Brewery. We’re proud to buy each athlete an ice cold Escape the Cape beer to celebrate their accomplishment. Can’t wait to try it myself!”

Colleen, Stephen, and the rest of the runners will be able to sip Escape the Cape at the pre-race party at the Tasting Room on Friday, June 10 from 5-7 pm and at the post-race party at Harpoon Henry’s after the race on June 12th from 11am-2pm.

Escape the Cape taps Thursday, June 9th in the Tasting Room and in better bars and restaurants throughout the area. Best of luck to Colleen and all the competitors this weekend!

On this island, it’s hard to throw a Cape May Brew Co frisbee without hitting a person exercising. There are runners on the promenade. Surfers on the beach. Even a retro rollerblader or two weaving throughout the historic district.

And to cater to all of the athletes, there are races. Boy, are there races. We’ve got

turkey trots, glow runs, nun runs, a Run to the Taproom 5K, even the Ocean Drive Marathon which kicks off here every spring.

But there’s nothing quite like this Sunday’s award-winning Escape the Cape. Not in Cape May,
not anywhere. It’s why we’re so proud to be among the sponsors.

Now in its third year, the event — comprised of a sprint triathlon (.35-mile swim, 12.5-mile bike, 5k run) as well as an international triathlon (1-mile swim, 25-mile bike, 5-mile run) — requires participants to jump 12-feet from the deck of the Cape May-Lewes Ferry into the Delaware Bay for the first leg of competition. At 8am on June 14, a record 1,700 athletes will take the plunge. Some of them will require the coaxing of a certified sports psychologist.

“Regular doctors talk you off of the ledge,” says event organizer Steve Del Monte of DelMo Sports. “He’ll have you leaping from it.”

Don’t worry – no one’s been injured in the race’s history. Save for our President Ryan Krill, who was set to participate in last year’s event until, just prior to the race, he nearly sliced off his thumb while installing a projector in the CMBC tasting room. You think jumping from a ferry is tough? Try balancing over a bar while cutting zip ties from a conduit.

Anywho, immediately following the competition will be an after-party at the ferry featuring barbeque, lawn games, and a special Pale Ale brew from yours truly called, appropriately, Escape the Cape.

“Cape May Brewery is a great partner,” Steve says. “The beer for this event – kind of like jumping from a ferry – is something you can’t get anywhere else.  CMBC aspires to expose its brand to as many people as possible without losing touch with what makes them special, and DelMo Sports has the same goal. We may be in very different fields, but that’s where we connect; that’s at the center of it all.”

As for the beer itself?

“The primary purpose was to make something refreshing for after a tough workout,” says Lead Brewer Brian. “At the same time, we made sure it has an edge because, I mean, these people are jumping off of a ferry. They’re pretty badass.”

So there you have it: a badass race and some badass beer… not a poor way to spend a Sunday. Of course, if you can’t get to the ferry for the big event, we’ll be tapping Escape the Cape in the tasting room on Friday, and pouring until we run out.

Best of luck to all participants!