The Official Blog of Cape May Brewing Company
Beer Industry

Well, maybe not rock so much as just never cease to amaze us. While we can totally imagine both Senator Menendez and Senator Booker flying on a bald eagle, trailed by rainbows and freedom, impossibly always in front of a billowing American flag, all while ripping a guitar solo like there’s no tomorrow, perhaps “rock” isn’t how we should phrase it.

“Tirelessly fighting for the little guy.” Yeah. That’s what we should say.

We’ve written about this bill before: it began its life as the Small BREW Act and has since been rechristened with this slightly-less inspiring moniker. We could explain it again, but, luckily, the good people over at the Brewers Association came up with the handy-dandy infographic below to help us out.

“The Craft Beverage Modernization and Tax Reform Act of 2015 would lower the federal excise tax on beer produced by craft breweries across the country,” says Senator Menendez.  “With over 40 craft breweries and a growing industry in New Jersey, this much-needed tax break would help these local, small businesses purchase more equipment, expand their operations, and create more good-paying jobs for New Jerseyans.”

Ryan agrees. “This bill would cut our excise liability in half. With that money, we’d be able to buy better lab equipment and ultimately brew better beer.”

It would be a great thing for craft breweries across the country, creating more jobs in a time when they’re desperately needed. As the infographic below says, one job created in brewing generates a whopping 45 jobs in related industries. And for every dollar saved by small, independent brewers, an additional $8 is added to the economy.

“The legislation has far-reaching implications,” Ryan says. “It doesn’t just help us, it helps numerous links in the supply and distribution chains.”

“Craft breweries are a growing segment of our small business community and are creating new jobs across New Jersey. Not only are these companies generating economic growth, their profits are largely staying in and benefiting the communities in which these small breweries are located. I co-sponsored the Craft Beverage Modernization Act because it represents a reasonable compromise between large and small brewers that will help federal policy keep up with the changing face of brewing in the United States,” Sen. Booker said.

How can you help? Write your lawmakers.

In the meantime, we give our heartfelt thanks to Senator Menendez and Senator Booker. Your tireless service to the people of this state does not go unappreciated.

For when you get sick of rehashing the most recent GOP debate with your friends, here’s another bit of political fodder, and it’s a lot less divisive than Trump (or even Trump’s hair): last week, Ryan headed to Capitol Hill with Gene Muller of Flying Fish.

First, they attended the annual holiday party put on by the Brewers Association. Here, brewers mingled with Congressmen and staffers at Rayburn, one of three office buildings for members of the House. While the goal was to eat, drink craft beer, and be merry, this was also a good opportunity to discuss with lawmakers all the good that would come from passing the Craft Beverage Modernization and Tax Reform Act, which we wrote about here. Reminder: it would have lowered the amount of federal excise tax applied to barrels of beer, thereby allowing for greater job creation within the industry.

We say “would have” because it has since been determined that the bill will not be put to a vote prior to the end of the year. It’s not that there isn’t support for it — Ryan reports a very warm, bipartisan reception. It’s that there are almost 8,000 bills currently before Congress, including a massive spending bill lawmakers are determined to push through before 2016. Sometimes, that’s just the way the cookie crumbles (the beer spills?).

But we can take heart for three reasons:

In addition to the holiday party, our fearless leader attended an event of the New Jersey State Society put on at Union Station, which allowed for greater networking with the likes of Senator Cory Booker, Congressman Donald Norcross, and Congressman Tom MacArthur. And then there were the congressional office visits, during which time Ryan and Gene cold-called eight lawmakers to discuss with them the importance of joining the House Small Brewers Caucus (aka — the squad responsible for educating fellow elected officials on the value of craft beer… and bills like the Modernization Act). Since there are now breweries in nearly every legislative district, politicians have a vested interest in hitching their wagons here.

The good news: after these meetings, five more Congressional leaders signed on to support the Modernization Act (remember, greater support will increase its chances of being reintroduced next session), and four joined the caucus.

The bottom line: we’ve built momentum, and that means there’s good things to come for craft beer in the new year.

We’ve been writing quite a bit about the Small BREW Act currently before Congress, and why it would go such a long way toward helping small brewers create jobs. (Cough, reduction of the federal excise tax applied to barrels of beer, cough.) We’ve also been writing about potential roadblocks, including lobbying by multinational breweries for their own, competing bill. 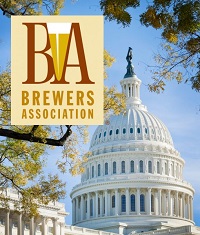 A third horse has entered this race in the form of the Craft Beverage Modernization and Tax Reform Act. It’s a compromise bill in that it should appease the big guns, but it contains all of the elements of the Small BREW Act… in fact, it takes that bill one step further.

In a statement issued this week, Brewers Association President Bob Pease says: “Not only would this legislation recalibrate excise taxes—an issue for which we have long advocated—it would ease a number of burdens for brewers, including simplifying label approvals and repealing unnecessary inventory restrictions.”

Thanks to the man behind the plan, Senator Ron Wyden (D-OR), for fighting the good fight, and to our own President Ryan Krill, leader of the Garden State Craft Brewers Guild, for advocating on the Hill.