The Official Blog of Cape May Brewing Company
“It has this malty complexity that’s rich and indulgent, and when paired with the bourbon characteristics that came through from the barrel aging, it has this beautiful velvety texture that pairs amazingly well off of the base beer.”
Beer School

We see you shiver. With antici….

That’s pretty much how barrel aging goes. We’ll start on a project, then shiver with anticipation for about a year until we finally get to reap the fruits of our labors.

It’s the case of this week’s release: we’ve had our fan-favorite Russian Imperial stout, Concrete Ship, aging for ten months in freshly emptied bourbon barrels, and the anticipation is finally over.

Read More
Fondue is like romance in an earthen pot.
Fun & Random

Valentine’s Day is for you and your significant other. Everyone else can fall by the wayside.

Well… everyone except CMBC, that is.

People are Talking about Concrete Ship

Concrete Ship is one of our most well-received beers. We first brewed it in the summer of 2015, but soon realized that this is a brew best sipped while chasing away the winter blues.

Named for the sunken SS Atlantus, a retired WWI concrete ship visible from Cape May’s Sunset Beach, our Concrete Ship is perfect for chasing away this frigidly cold winter weather. At a respectable 10.5% ABV, this Russian Imperial Stout will keep you warm no matter how low the temperatures plunge outside.

A fantastic stout, but don’t take our word for it — read what people have been saying about this stellar stout.

Stouts are perfect for winter. When the temperature turns to the single-digits — as they have been as of late — all you want to do is curl up by a fire wrapped in a blanket with one of these high-ABV brews and forget about the world around you.

The next best thing to drinking a hearty stout is cooking with it, and some of the sharpest minds at the brewery all tend to agree that it’s excellent in a beef stew. And there’s no better stout to use than Concrete Ship. 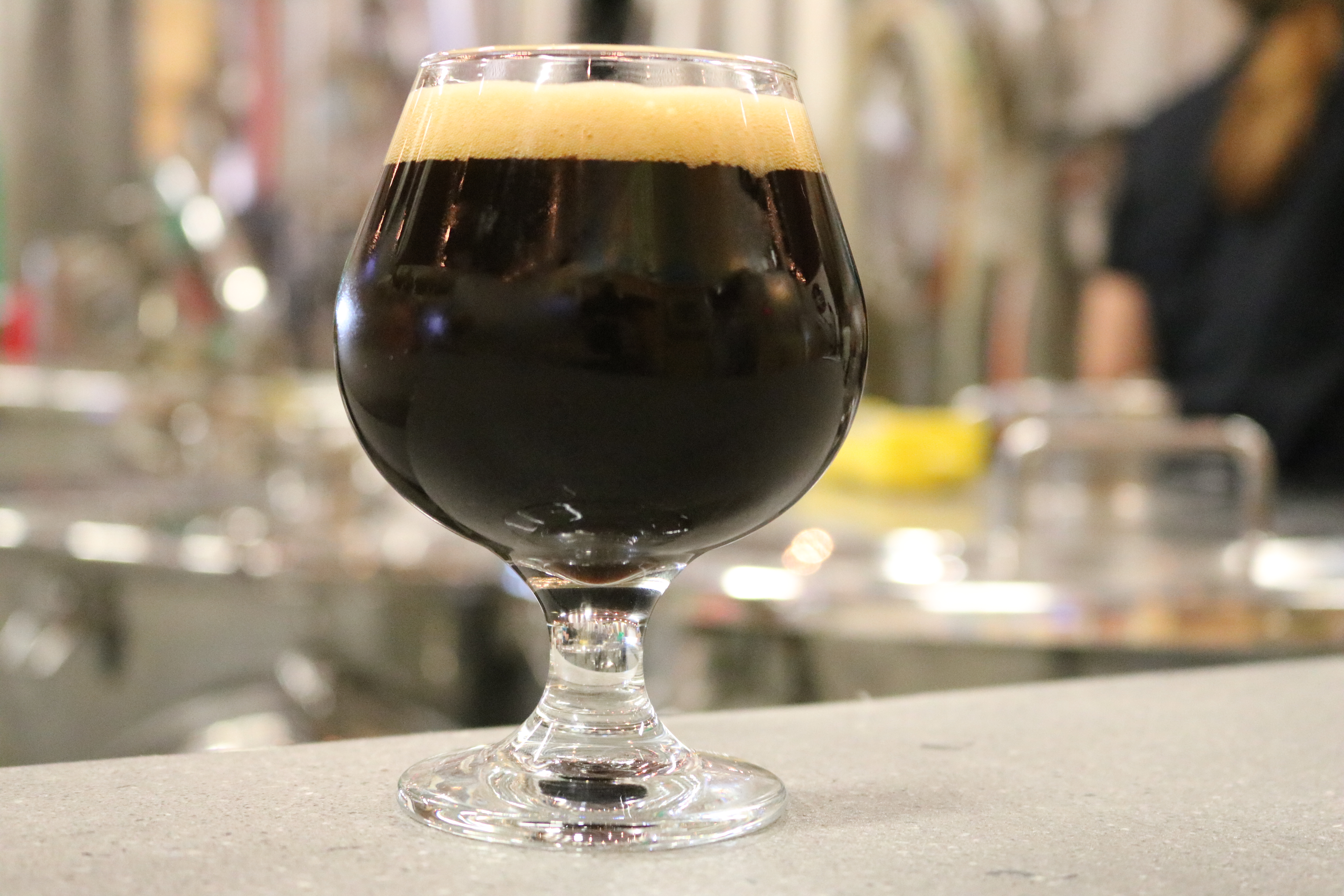 In the “should do” category: drink as much Concrete Ship as you can responsibly handle.

We first started brewing Concrete Ship in July of 2015, as the very last of our Employee Series. It was so well-received that we brought it back in December of last year.

Russian Imperial Stouts were originally brewed at the request of Empress Catherine the Great. She needed a robust brew that would stand the test of the treacherous, thousand-mile trek from London to Eastern Russia, and these full-bodied, heavy stouts were just the thing. 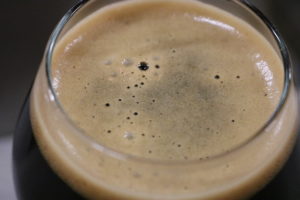 “That’s Concrete Ship in a nutshell: big, roasty notes boasting a touch of heat from the alcohol thanks to its 9.5% ABV, and has a velvety smooth texture that’s a perfect sipper for the frigid temps coming our way.”

And stouts are perfect for the winter months. “The roasted flavor and chocolate notes have that warming effect for when the wind is howling, and they also go great with classic winter meals, like stews and roasts and the like,” says Director of Brewing Operations Jimmy Valm. “Russian Imperial Stouts are even better, since the warming effect from the higher ABV makes it feel like the beer is snuggling up under a blanket with your palate.”

Snuggling up under a blanket with one of these is exactly how we intend to spend this entire winter. It’s already too cold.

Nonetheless, both Jimmy and Brian agree: the great thing about Concrete Ship is its balance.

“Concrete Ship has a complex grain bill and a shit-ton of hops in there,” Brian says, “yet no one aspect takes center stage.”

“The dark chocolate and the roasted malt flavors are harmonious with a touch of toffee malt sweetness on the finish and the pleasantly subtle notes of the higher alcohols,” Jimmy agrees.

Concrete Ship is an exceptional brew for your holiday season. Jimmy will be taking home a growler and “seeing if my father-in-law and I can finish it off together on Christmas Day!”

So now, in the “shouldn’t do” category: build a concrete ship and expect it to do anything other than sink.

We named Concrete Ship after the SS Atlantus, a concrete ship currently inhabiting a watery grave off Cape May Point’s Sunset Beach.

During WWI, the United States had a bit of a steel shortage, so we started to look around for other cheap materials with which to construct ships. Someone said, “Hey. Concrete is a thing. Let’s give it a whirl.”

Basically, if you construct anything into a shiplike formation, it’ll float — ships float because they’re essentially a bucket of air. These concrete behemoths definitely did the job; however, at 3,000 tons, they weren’t particularly cost-effective. And, as you might imagine, 3,000 tons of concrete isn’t exactly going to be winning any races. These things were huge, expensive, and slow.

Even better, the fleet of twelve ships wasn’t complete until after the war.

In 1926, a wild wag of an entrepreneur named Colonel Desse Rosenfeld saved the SS Atlantus from a ship graveyard in Virginia, planning to move it to the Delaware Bay to serve as a dock for a ferry between Cape May and Cape Henlopen in Delaware. Obviously, the ferry was a great idea, but, after it was towed here, the SS Atlantus broke free from her moorings in a storm and ran aground.

The SS Atlantus is still visible from Sunset Beach. For years it was a permanent advertisement for boat insurance — literally. Someone named A.M. Bianchi painted a billboard promoting his company sometime in the 40s.

Now, it’s slowly decaying, and soon it will disappear completely from view.

In the meantime, Concrete Ship — the beer — is on tap now. Grab some before it disappears completely from view.

No, the record isn’t skipping. This is the third week in a row we’ve brought you three new things to sip.

First up is our One-Off Wednesday: Lemongrass Ginger Devil’s Reach, for which fresh lemongrass and fresh ginger have been infused into our flagship Belgian Strong Ale. The sweetness of these Asian flavors helps “balance out the intense finish of the beer,” says Manager of Culinary Special Ops JP Thomas.

On deck is Concrete Ship. It’s a BIG beer (ahem, 9.2%) named for a BIG ship, the 3,000-ton, half-sunk, World War I-era SS Atlantus that ran aground 150 feet from Cape May’s Sunset Beach. (The sinking part isn’t all that surprising when you consider it was made of concrete… we wrote more on that here.)

This Imperial Stout is rich and layered with flavors of coffee, dark chocolate and roasted malt. It’s so decadent, we like to think we wouldn’t mind going down with the ship, as long as this were on board.

“It’s a good sipping beer,” says Chris. “Think of it as your digestif, dessert in a glass.”

Concrete Ship is on tap starting February 4 at noon.

And for the dry dude or sober sister in your group, we’ve got a Habanero Mango soda, also on tap beginning February 4, in which the tropical notes of real habaneros complement the fresh fruit. No worries for the spice adverse; the soda has been strained over top of the peppers’ seeds – aka, the keepers of the kick — and not infused with them.

“The final product gives you just a little tingle on the lips,” JP says.

Beginning this Friday, Cape May Brew Co is serving up history by the pint. We’re talking about our newest release, Concrete Ship, a rich Imperial Stout weighing in at 9.3%. It’s a layered beer with flavors of coffee, dark chocolate, and roasted malt.

So… what’s with the name?

The story begins in 1918, when the military experienced a severe steel shortage and President Woodrow Wilson ordered the construction of an emergency naval fleet comprised of 24 concrete (yes, concrete) ships. This is what kids today would call a major fail. Only 12 of the models were completed, and all proved too heavy and, therefore, too impractical, for use in war. One of them, the SS Atlantus, found new life serving as a coal steamer in New England and, later, as transport for American soldiers from Europe home. Eventually, she was sent to Virginia’s “bone yard,” a cemetery for decommissioned ships.

In 1926, the 250-foot Atlantus was purchased by a salvage company for use as the dock to a new ferry system running between Cape May and Lewes, Delaware. But before she could be moved into place, a strong gale pulled The Concrete Ship loose from her moorings. A watchman aboard waved a sheet in distress and, while he and his cat (yes, his cat) were rescued, the Atlantus ran aground 150 feet from shore. The Coast Guard attempted to move the ship using two large towropes called hawsers, but the only result was two broken hawsers.

Since then, the wreck has become a photo-op for tourists. At one point, a local company attached a billboard advertising boat insurance to the side of the ship (har har). But winds and swell have beaten against the iron barbs of her skeleton for so long, only a small portion of the stern remains visible. Now, this is the backdrop to nightly flag-lowering ceremonies that honor veterans on Sunset Beach.

We’ll see you all on Friday, when we can raise a glass of big beer to the big ship with an even bigger story.