John Paul Thomas is the new head of Culinary Special Ops at the brewery.

“I guess the title of soda jerk was taken?” he says. 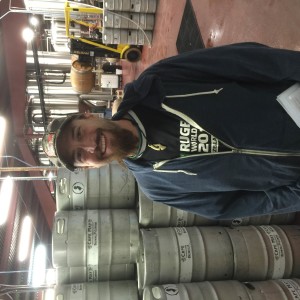 joined our team a month ago, he’s been tweaking our gingerale and rootbeer, and crafting his own cream, blueberry and lemon-lime recipes. He’s also been dreaming up some exciting gastronomic creations involving savory ingredients and beer (more on this to come later), he’s been making tasty-but-subtle cold-pressed coffee (on tap starting January 7), and he’s been brainstorming inventive new One-Off Wednesday brews.

“I like it when people dare me,” he says. “I like when they say, ‘You can’t put Christmas tree in a beer!’”

For the one-off on tap this week, this is exactly what JP’s done – infused our spiced Mop Water with rosemary, mint, and young needles he picked from a blue spruce at a local tree farm. The older needles, he explains, are less tender and too tannic.

“Whether you’re making a meal or infusing a beer, the goal is the same,” he says. “It’s all about balancing flavors.”

JP, a Villas native, graduated from Manhattan’s Culinary Institute of America in 2000 with a degree in culinary arts and from Johnson and Wales University in 2005 with a degree in restaurant entrepreneurship. Most recently, he worked as sous chef for the Laurel Creek Country Club in Mount Laurel.

“The brewery is a good fit,” he says. “First, it’s a nine-to-five position which, working in commercial kitchens, I haven’t ever had. But just like making food in a kitchen, making beer is part science, part art. I’m looking forward to experimenting.”

In the meantime… stop by and say hello.

“I’m all about new ideas,” JP says. “So feel free to pass them along!”