The Official Blog of Cape May Brewing Company
Local Interest 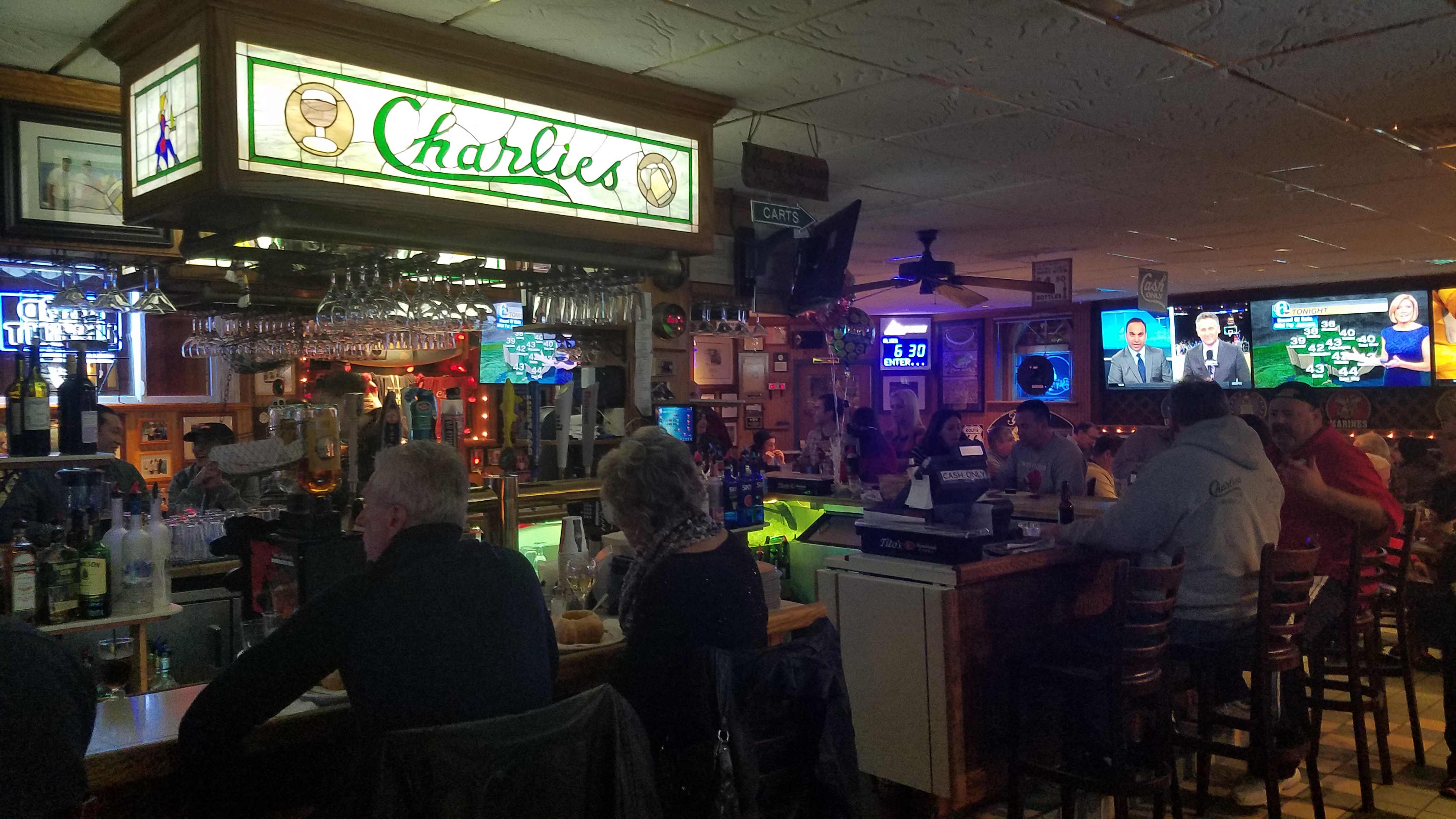 “I used to take money off the bar and run,” he says, laughing. “And we had a cookie machine, a Lance machine. They used to give me the job to count all the quarters. I was probably nine or ten — I’d count the quarters then hand over the money. But you’d hear my pockets swishing with quarters. ‘No, I didn’t take any!’”

When you’re the scion of the longest-running family-owned bar in Somers Point, stories like that are such a part of your life, you don’t really consider them extraordinary.

Jim Thomas, proprietor of Charlie’s Bar in Somers Point, is the great-grandson of Charlie Thomas, who first opened the bar at 800 Shore Road in 1944.

Jim started working at the bar fifty years later, bussing tables and dishwashing. He and his brother Jeff worked at Harbor Cove Marina during the day, “gassing up the boats, get a tan, fish. Then come up here nighttime to bus tables.”

“There’s so much history to the place,” he tells us. “We get to see my grandfather’s friends that come in, still: my grandfather died before I was born. They say, ‘Hey, I knew your grandpop.’ or ‘I remember you when you were this big.’ I mean, we’ve been here forever.” 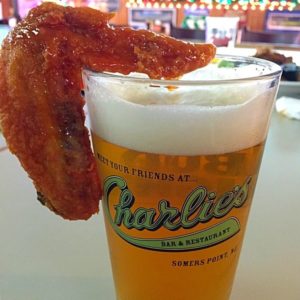 The Thomas family has done more than just own a bar in a Somers Point: they’ve given quite a lot back to the town that’s given them so much. Jim’s father donated the football lights at Mainland Regional High School in 1995, and Jim and Jeff donated the baseball team’s scoreboard. Charlie’s family is as much a part of the town as the bar that bears his name.

“We were Cheers before there was Cheers,” he says.

Charlie’s definitely has a neighborhood bar atmosphere. While we were there — 5pm on a Wednesday — the bar was filled with regulars and families grabbing a great dinner. A small family birthday party was in attendance — the honoree couldn’t have been older than fifteen — and it seemed like the staff knew him well. After the dinner rush, “we get a little lull, then we have the younger crowd come in. So it’s a little bit of everybody.”

“Lots of loyal customers. Lots of great patrons,” Jim tells us. “A lot of great employees that have become the foundation of our business.”

Over the years, Charlie’s has become synonymous with chicken wings. Their wings had been voted The Press of Atlantic City’s “Best of the Press” every year since they’d started the program. They were voted so often that the Press was forced to retire the category. “Now we get Best Bar and Pub, four years running.”

Jim attributes the wing’s success to their freshness. “Fresh. Fresh. They get delivered twice a week. Whole wing, jointed together, and we cut them fresh downstairs,” which they were in the process of doing during our visit. 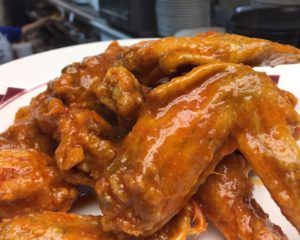 “I had someone message me on Facebook: ‘How come your wings have that tip?’ That’s one way to tell if you have fresh wings or not, because you can’t buy frozen wings that way.”

New Year’s Eve and Christmas Eve are big nights for wings — “Everybody likes to put chicken under the tree. Start the year with chicken.”

But Super Bowl Sunday is a completely different story: Charlie’s goes through an astounding seven-and-a-half tons of chicken in one day. “It’s like Roger Waters building The Wall: it’s just buckets everywhere.” They basically have to remodel the kitchen by removing the steamer and adding two huge fryers to accommodate the demand.

So… you may want to get there early on February 5th.

“No one can come close on the sauce, though, either,” he says.

“That’s the keys to the castle, right there,” Richie agrees. “The sauce.”

Beer and wings are a match made in ‘Murica-heaven. “Coastal Evac is huge,” Jim says. “People like that because they only have to have one or two.”

Jim was first introduced to CMBC at Wingcraft in Atlantic City about a year-and-a-half ago. “I’m good friends with the brothers Tony and Nick,” he says, “and they got me in touch with you guys.”

Over the summer, our IPA was a huge seller, as well, and they’ve got Mop Water in bottles.

“With you guys, they see the handle and they want it. That’s a good thing.” 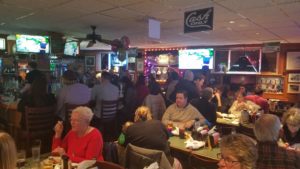 The rest of the menu is equally as impressive — it certainly goes much further than wings. Jim mentions Wes’s Favorite — a freshly-sliced, 5 oz. filet, grilled to perfection, then topped with melted provolone cheese, lettuce, and tomato and served on a garlic butter herbed kaiser roll. Another of his favorites is Jack’s Scallops — fresh blackened scallops served over a bed of sauteed spinach sprinkled with blue cheese crumbles and a banana strawberry liqueur sauce.

The kitchen is open on the weekends until two am, and during the week until at least one am. During the summer, it’s open until two every night. The bar is open seven am until three am Monday through Saturday, and nine am through three am on Sunday. “It used to be noon, until they changed the law. People used to be waiting outside. They’re still waiting. We’re two deep at the bar by ten am.”

Charlie’s runs a trivia night every Monday — Wednesdays during football season — except during the summer. Bar Olympics  — darts, shuffleboard, 8-ball — on Thursday nights January through May. They pull in a DJ five nights each year, like for their Ugly Sweater Party and Halloween. Monday Night Football sees the Lobster Challenge: guess the weight of a 6-12-pound lobster, and that’s your free dinner. 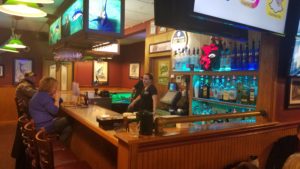 Charlie’s has an impressive thirty-two taps — sixteen at the front bar and sixteen at the back bar. “The back bar is our hidden gem,” Jim tells us. “No one knows about it — it used to be a barber shop.” They’ve got nineteen different beers on tap.

“We just put in a new system last year: we went from twenty-four taps to thirty-two.” They’ve got a direct-draw box just behind the back bar — “it’s butt-up against it. It’s like a four-inch line. There’s no waste going on there at all.”

(At this point, the conversation took a twenty-minute diversion while we traded Phish stories as Richie looked on, helplessly. Jim’s got a good one regarding the lead guitarist, Trey Anastasio, donning a Flyers-themed Charlie’s t-shirt during setbreak at the Mann in 2014.)

Charlie’s has been cash-only since the beginning. “That’s the old man,” he says. “I’m all about convenience.” They’ve got an ATM on site, but, at the moment, the bar is cash-only.

“At the Shore since ‘44,” is Charlie’s motto, and the hometown feel has been front-and-center for over 70 years. They’ve been at the forefront of Somers Point’s bar scene since then, having seen it all — including changes to Somers Point’s famously-restrictive Blue Laws, the tribulations of navigating Bayfest, and numerous expansions, additions, remodels, and reinventions.

They’re still going strong after all these years, and show no signs of slowing down.

For more information on Charlie’s, check out their website at www.charliesbar.com.