About a year ago, we were lucky enough to have Bill Zaninelli join our team.

Bill is beer. He’s been in the business for years and it fits him well. He started in merchandising for Crown Beer Distributors in college in the mid-80s, spending twelve years working his way up to General Sales Manager. He spent seven years with Beck’s, did a stint with InBev USA, then moved into craft beer. He worked with a few Vermont breweries, opening them to the New Jersey market.

Then, we got our mitts on him. We were lucky. He was lucky. Bill is one-of-a-kind. 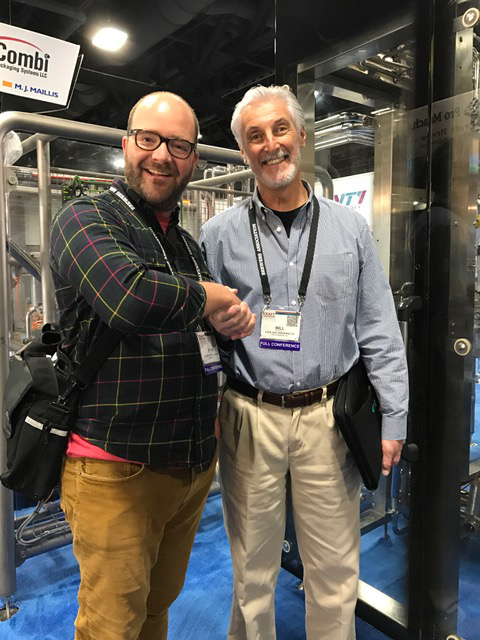 We’ve seen some incredible growth over the past six years or so. We started with three guys brewing one beer in one 1,500 square-foot space, and we’ve since expanded into four units at the airport, quintupled the size of our beer garden, expanded the Tasting Room, build a Brewtique, and moved into a huge building across the street. With over 23,000 square feet of space, we now employ almost fifty men and women who work hard each and every day to build a brewery that makes us proud.

We’ve hired a Director of Sales and Marketing!

Since the beginning of CMBC, Ryan’s been overseeing the sales and marketing departments. He’s been doing a great job — we wouldn’t have gotten to this point if he hadn’t — but it’s become such a large part of what he does on an everyday basis that handing over the reins will free him up to focus on the big picture.

“We were looking for someone to add to our leadership team with a wealth of experience in the beverage industry,” Ryan says. “With Bill, we found our guy.”

Bill Zaninelli’s resume reads like a who’s who in brewing. He started in merchandising for Crown Beer Distributors in the mid-80s, spending twelve years working his way up to General Sales Manager. He spent seven years with Beck’s North America in Stamford, CT, starting as a New Jersey Regional Sales Manager and working his way to Senior Sales Manager, overseeing nine wholesalers.

After a stint with InBev USA, his career track branched into craft beer. With eight years at Long Trail Brewing and Otter Creek Brewery in Vermont — first as Market Director, then as Vice President of Sales — he opened them to the PA-DE-MD-VA market and eventually opened Long Trail distribution in Ohio, growing the brand and expanding sales.

Bill thinks the craft beer market in New Jersey is poised for growth. “That’s why I’m here,” he says. He’d been interviewing around for awhile and CMBC was the last of four interviews he had lined up that week. He actually had another offer on the table before he came down here, but wanted to give us a shot.

“I was very impressed,” he tells us. “You guys have a vision, the brewery is spotlessly clean, which is big for me, and you have your ducks in a row. Your brewers know their shit. The graphics are great. The story is good. The marketing is solid. You guys have your shit together.”

“There’s a lot of opportunity in New Jersey and outside of New Jersey for Cape May,” he says. “From what I know and can maybe help you do, it seems like a good marriage.”

He’s looking forward to the challenge of growing a small, local brand. In a way, his career has funnelled down to this point: starting with an international conglomerate, moving to a national brand, then a regional craft brewer — the next logical step is taking a local brand and moving it up the ladder.

“I’m really enthusiastic about doing so,” he says. “Craft is fun. And I like giving the big guys a run for their money.”

Bill grew up in Somerville, NJ, up near Edison, and has been two-and-a-half miles from the beach in Point Pleasant for 33 years with his wife Mara, a kindergarten teacher — they celebrated their 37th wedding anniversary this week. They’ve got two kids, Faye, a third-grade teacher, and Rusty, who worked this past winter with the US World Cup snowboard team in Europe and is running a surf shop on the Asbury Park boardwalk this summer.

“I’m a Jersey guy with a lot of vowels in my name.”

Even being in the Northern Shore region, he’s still an Eagles fan, thank goodness. Unfortunately, he’s a Yankees fan, but no one’s perfect, and we never hold it against anyone.

It sounds like we should let him curate a playlist in the brewhouse. You know, in his spare time.

In addition, he’s a bit of a fitness nut, which is a difficult thing to be in this business. He once ran 392 days in a row, through rain, snow, and hurricanes. He plays basketball, he loves to ski, and he does whatever he can to keep in shape.

In Cape May, he’s found a new home. “It’s beautiful. It’s really nice down there, it really is. It seems a little more laid back than Point Pleasant. It’s wide open, and the Victorian homes are beautiful. The beaches are nice: the sand is like powder.”

Once he applied at CMBC, he started drinking our brands “rather heavily”. He’s a fan of Coastal Evacuation, and can’t wait to try our IPA on Nitro.

“What I’ve tried, I’m impressed with,” he says, “and I’ve been drinking pretty good beer for awhile.

“If you’re gonna drink beer, you might as well drink good beer.”

In our fifteen-minute conversation with Bill this week, it didn’t take us long to decide that he’s definitely the right guy for the job. We’re sure Ryan and Hank took a little longer, but it’s plain to see that he’s enthusiastic about the position, he’s excited about the challenge that lay ahead, and he’ll definitely be the guy to help bring CMBC to the next level.

And he’s got a great sense of humor.

“My wife is still waiting for me to grow up,” he says, “but don’t hold your breath, anybody.”

No worries, Bill. We wouldn’t want you to.