The Official Blog of Cape May Brewing Company
"It definitely seems like a party going on with all of these hops.”
Beer School

Nine years since we opened our doors back in 2011.

It’s at once both easy to believe and impossible to believe. From our humble beginnings in that one, 1,500 square-foot unit to the 52,000 square feet we occupy now, in four buildings in Cape May and Egg Harbor Township, it sure has been one helluva ride.

And that ride definitely deserves a beer.

So, we’ve brewed up the latest in our Anniversary Ale line: number 9, a 9.0% ABV double IPA crafted at nine pounds-per-barrel with an overabundance of wheat and an obscene amount of hops, Anniversary Ale 9 is juicy, tropical, and saturated with hops

Read More
“It's the lure of more hops that did it, because who doesn't love more hops?"
Beer School

Bob Ross taught us that we don’t make mistakes, we make happy accidents. Those are certainly words to live by, particularly in the brewing world.

For example, if we hadn’t mucked up a batch of Cranberry Wheat back in the day, we wouldn’t have The Bog. That, certainly, is a happy accident.

However, that happy accident happened over six years ago. Six years later, with eight years of brewing under our collective belt, mistakes are fewer and farther between. When they happen — and they do — they’re much smaller mistakes than over-cranberrying a Cranberry Wheat.

It’s ironic that something as simple as an added word in a description could affect the entire recipe of a beer.

Even more ironic that it’s what happened to the brew meant to celebrate eight years of killer beers, Anniversary Ale 8.

One of the fun things about this business is that brewers can express a number of different things through their recipes. For example, we were originally asked to brew Follow the Gull for Cape May County’s 325th anniversary — so we threw 325 pounds of hops at it and 3,250 pounds of malt.

So, for our seventh anniversary, we’ve brewed up a special double IPA — Anniversary Ale 7.0 — and you’d better believe that our guys on the brewery floor went to town with lucky number seven. 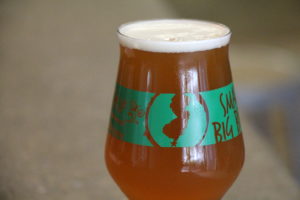 Casey Anthony was, too.

The Arabs were Springing.

Fukushima was in meltdown.

The space shuttle was ending.

Penn St. football was in chaos.

Today, to mark this momentous occasion, we’ve brewed the next release of our quarterly double IPA: Anniversary Ale 5.0.

Bridging elements from two of our core IPAs – the slightly malty finish with piney and floral notes of Cape May IPA combined with a hint of dankness and citrusy aroma from Coastal Evacuation, Anniversary Ale 5.0 is a nod to everything we’ve brewed up so far while keeping an exciting eye on the greatness still to come.

We’ve come so far in five years — from brewing 12-gallon batches to brewing 4,500 barrels last year. This beer is as much a celebration of us as it is a gift to you, our fans.

We’ll be partying hearty all month long! Plans are in the works for an anniversary bash and some serious fun times ahead. Watch this space!