Spotlight On…: The Ugly Mug

The next time you hear someone say, “Man, what an ugly mug!” tell them you take it as a compliment.

A Cape May institution since 1949, the Ugly Mug is serving up great food, great brews, and great times at their location at 426 on the Washington Street Mall.

We got together with General Manager, Dwight Dunbracco, to find out just what makes this mug so ugly.

One of the first things you notice in the Ugly Mug is the fact that there are mugs hanging everywhere. “500 or so,” Dwight estimates.

“The mugs are an old drinking club tradition,” Dwight tells us. “We have some that date as far back as when we first opened.” 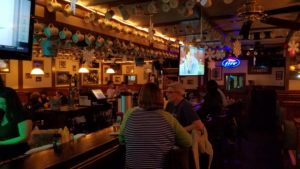 Once an owner of a mug passes away, the mug is turned to face the ocean. “A lot of times family and friends will come in and pull their family member’s mug down and have a drink out of it.”

These days, the mugs aren’t easy to come by — they’ve more-or-less stopped issuing new ones — and they don’t really have room for additional mugs, anyway.

Yet, if you’re one of the lucky few to have access to a mug, they’ve got multiple choices when it comes filling it. There are ten lines throughout the establishment, with CMBC always on two of them at a time: one an IPA and the other a seasonal. At the moment, they’ve got Honey Porter and the last of the Three Plows IPA — which has only gotten better with age — on tap.

CMBC is a big seller at the Mug, with customers coming in and asking “What’s your Cape May?” Our flagship IPA always “flies outta here,” according to Dwight, but the Honey Porter has been doing well, too. “That seems to be a good wintertime seller for us.”

According to Richie, they’ve got “the best cooler in the business.”

It sounds like it’s everyone’s favorite cooler to deliver to — an absolute nightmare. “We have a chute down the side you have to shoot the kegs right down,” Dwight says, laughing.

No matter to our intrepid drivers at CMBC. They’re jedis.

The Mug has an interesting setup behind the bar: “Turbo Taps” — longer taps with a wider mouth that reach deeper down into your glass. This results in less foam and a more evenly-poured brew.

It sounds like the Turbo Taps would make one of their annual events a little more difficult to host. Held on the first Sunday after Labor Day, the National Froth Blowing Champion is the one who blows the most froth.

Yep. This is seriously a thing.

And serious business at the Mug. Benefitting the local Police Athletic League, the bartenders at the Ugly Mug fill pilsner glasses about half-and-half with beer and head — not exactly what you’re looking for on a night out, but perfect for froth-blowing.

“It gets real messy,” Dwight says. “Whoever blows the most foam off their beer wins.”

There’s a lot of serious measuring going on in multiple rounds of competition, since the winner gets a trophy, their name in the paper, and a coveted Ugly Mug mug. This year’s winner was Cape May local Kate Robbins.

“I think it’s the atmosphere and the at-home feeling that makes people comfortable here all year ‘round,” Dwight says. 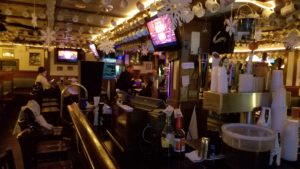 The food at the Mug is definitely more than you’d expect from a bar in Cape May. They’ve got the typical barroom fare — burgers, mozzarella sticks, and sandwiches — but it’s just out-of-this-world.

“We get our lunch meat from Carnegie Deli in New York City,” Dwight informs us, proudly. Their roast beef, pastrami, and corned beef is trucked in from the Big Apple each week. They run drink specials every night, with special menus thrown in. The night we were there, the special menu included a whole selection of special burgers, including a Southern Grilled Burger with brown sugar, bacon, honey BBQ sauce, sharp cheddar, and caramelized onions, and a Sriracha Burger with crispy fried onion jalepeño straws and hot pepper jack cheese, glazed with sriracha sauce.

“My old man geeks out for that,” Richie informs us.

With the kitchen open until at least midnight over the winter, the Mug has a late menu that goes until 2am. “You can always get a bite to eat here, no matter what time.”

So, whether it’s food you’re looking for or a Cape May brew or just a good time, swing down to the Washington Street Mall and check out the Ugly Mug.