“I was sitting at Cape May Brewery, enjoying a beer,” Wingcraft owner Nick Ballias tells us. “I said, ‘Why are all these people in an airport hangar in Cape May?’”

“I thought it was something to look into,” he says.

He had a few other options, but once he found the location literally across the street from the Atlantic City Convention Center at 2010 Baltic Avenue in Atlantic City, he knew he’d hit upon a winning plan.

“It just made sense that craft beer was a good draw,” he says. “People were coming to an airport to drink it, so I figured it was a good idea.” 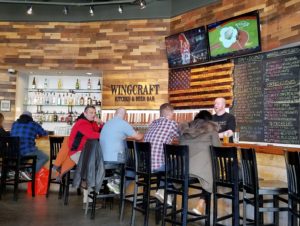 And thus, The Spot for craft beer in Atlantic City was born. Since first opening in the summer of 2014 in the middle of the Tanger Outlets, Wingcraft has become synonymous with craft beer in America’s Playground.

With a name like Wingcraft, it’s easy to assume what the original idea was: craft beer and wings.

“We called it Wingcraft, because we wanted to have a focus on wings,” he says, “but we quickly became famous because of our burgers.”

Open from 11am to midnight, their Philly steak rolls, focaccia bread, chicken tenders — nearly everything on the menu is made from scratch in-house.

Nick points to the Manhattan Project as being a must-try for revelers. With smoked gouda, crispy fried onions, and steak honey barbecue sauce, the burger is as much a draw as the brews. 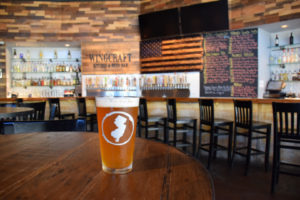 And what brews! When they originally opened, Wingcraft had twenty taps of exclusively craft beer. They’ve since doubled that number, all without bringing on a line of Big Brew.

“We were having trouble representing a lot of the local brands and keeping on some of the staples from across the country,” Nick says. “So many breweries were opening up across New Jersey, we figured that expanding our taps was the right move. That way we can still represent a lot of local breweries, but still have a lot of stuff from around the country.”

Cape May is one of their big sellers. They always have our flagship IPA on draft — if not regular, it’s on nitro — and they tend to jump at our seasonals, too. All Richie had to do was mention that The Bog was coming out soon (May 4th in the Tasting Room!), and the guys at Wingcraft were all over it — “Just send me one,” the beer manager, Arelio, said.

“We like Cape May,” Nick says. “Everything we put on from Cape May sells.”

Last year, as the lead-in to the Atlantic City Beer and Music Festival — coming up next weekend — CMBC held a 20-tap Tap Takeover at Wingcraft. At the time, it was the largest Tap Takeover either of us had ever done.

This year for AC Beerfest, Wingcraft is inviting some of the breweries at the festival to take part in their “Best of the Fest”. Starting Monday, March 27th, they’re tapping the best brews from the participants at Beerfest. Some of the country’s most sought-after brews will be on tap, including Dogfish Head’s 120 Minute IPA, Founders KBS, and our very own White Caps. 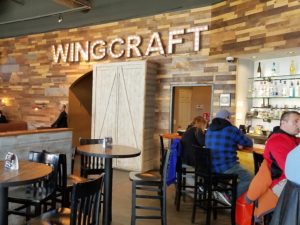 “We’ll have the best that every brewery has to offer,” Nick says. “If they’ve got something they want to show off, we want them here.”

Wingcraft is also sponsoring Wing Wars at Beerfest for the second year in a row.

You just chow down on as many wings as possible in the given amount of time. Each session will have its own competition, and those iron-stomached individuals who are willing to put themselves through such gastronomic distress can sign up beforehand at Wingcraft.

It should be a good time, particularly if you’re heading down with a big crowd and have a built-in cheering section.

To drum up some awareness, Nick is restoring a ‘48 Chevy pickup and putting it in the middle of the Convention Center.

“We’re getting old-school painting and lettering on the side — Wingcraft Kitchen and Beer Bar — and it’s dropped and lowered,” he tells us. “It’s gonna look pretty cool.” 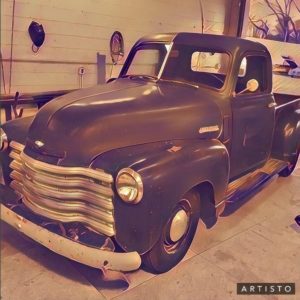 It’s certainly going to start some conversations in the Convention Center. Nick is planning to have whiskey barrels and kegs in the back, and the tailgate has a beer bottle opener. Unfortunately, Chevy never offered those things as standard equipment in ‘48.

They’ve got a t-shirt launcher and will be giving out swag from the back of the truck during Wing Wars.

“That’s how you know you’ve made it,” Richie quips. “You’ve got a t-shirt launcher.”

Generally speaking, Wingcraft is a pretty laid back place. Definitely not a party atmosphere, people come to enjoy some good food and good brews. Nonetheless, when the city’s busy, Wingcraft is busy.

“If there’s a concert in town, a boxing match, a wrestling match at Boardwalk Hall, we’re slammed,” he says.

His business tends to live and die by the life of a struggling casino town.

“Every week, there’s a different convention in town,” Nick says, which tends to keep a lot of locals away.

“There’s a lot of people that hear about us, but they haven’t made a point to come into the city,” Nick says. “I hear it all the time: ‘I’ve heard such great things, but I haven’t been there yet.’

“Make time to come in and see what everyone’s talking about.”

It’s sadly true. If you’re a local coming down to Atlantic City for a night of gambling, you’re probably not making it to the northwest side of town. It’s literally just off the Expressway, but it’s an easy place to skip if your plan is hitting the casinos.

Take it from us: don’t skip Wingcraft. Make it your first stop. Grab a great burger and some killer brews, then hit the casinos and lose all of your hard-earned money and drink their watered-down drinks and overpriced Big Brews.

You’ll be glad you did.