With St. Patrick’s Day on the horizon, everyone and their brother is on the hunt for an authentic Irish pub. While they might be a-dime-a-dozen in big, Irish-based cities like Philadelphia, New York, or Boston, they’re a little harder to come by at the necessarily beach-centric Jersey Shore.

Luckily, denizens of Cape May have had Carney’s on the promenade since 1979, and they’ve recently decided to start serving CMBC brews.

We got together with Sean Carney — the current manager and latest generation of Irishmen to run Carney’s — to talk about the bar and his plans for the Irish High Holy Day of St. Patrick.

Sean’s grandmother Maria purchased the property almost forty years ago, after his grandfather passed away. His father and four brothers are still involved in the business to varying extents. Built as Sid’s in 1964, there’s still a mural of Sid drinking by the docks on one of the walls.

“The mural is the only thing left from the original building,” Sean tells us.

There’s a lot of tradition at Carney’s, and Sean credits the family-owned atmosphere to Carney’s success. But Cape May’s nightlife stops and starts at Carney’s.

“The Other Room is more for dining,” Sean tells us. “The Main Room has a stage and is more casual, with live entertainment seven nights a week in the summer.”

Sean’s got a great weekend on tap for St. Patrick’s Day. A full menu of traditional Irish fare, including Corned Beef and Cabbage, Guinness Baby Back Ribs, and Lamb Stew. For $20, you’ll get a three-course meal with soup, an entree, and dessert.

“The Corned Beef and Cabbage is something we pride ourselves on,” Sean says.

The weekend starts with a bar crawl Friday night. Starting at 6pm, it begins with a welcome party at Cabanas, then moves around the block to Fins, the Ugly Mug, Delaney’s, and will end at Carney’s — and CMBC is on draft at each of them along the way.

The night culminates with a King and Queen contest — a costume contest to determine St. Patrick’s Day royalty — with a live band. 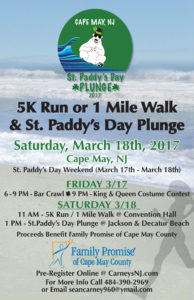 But the highlight of the weekend is the St. Paddy’s Day Plunge.

“I’ve been heavily trying to get this off the ground for the past two years,” Sean says. “I met with the city and the new mayor this year and they graciously approved it, and helped out along the way.”

The King and Queen will be leading revelers into the Plunge at 1pm on Saturday. The day starts with a kegs and eggs breakfast at Carney’s at 9am, complementary to participants.

At 11am, there’ll be a 5K run/1 mile walk at Convention Hall, with first, second, and third male and female prizes given on the certified course.

Following that at 1pm, it’s time for the First Annual St. Paddy’s Day Plunge, with revelers jumping into the frosty, March Atlantic Ocean.

The after-party starts at 2pm at Carney’s, with the Relatives live on stage and CMBC flowing all night long.

Sean knew that he wanted to do the Plunge in conjunction with a local charity — “something important to the community,” he says, “where we could give back.”

Through his church, he was acquainted to Family Promise, a non-traditional family housing program dedicated to helping homeless families with children get back on their feet. They offer food and a place to stay while the parent returns to work. Most families are involved in the program for up to four months before they’re able to find their own, permanent housing.

And that seems like an attainable goal. Early registration is $25, with day-of registration costing $30. Kids under 15 are $15. Sean needs fewer than 400 participants to make his dream a reality.

You can register 12-9pm at Carney’s on Friday, 8am to 12pm on Saturday on the promenade in front of Carney’s, or online at carneysnj.com.

However, if the idea of jumping into the frigid Atlantic on the third weekend in March doesn’t exactly appeal to you, no worries. You can always grab a cold CMBC brew and watch the fun from inside the warmth of Carney’s.