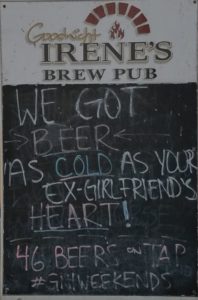 When you’re in Wildwood and you’re looking for a beer — and you want to choose between 38 taps — there’s really only one place to go: Goodnight Irene’s at 2708 Pacific Ave, on the corner of Poplar.

Close to New Jersey Sales Manager Richie Rallo’s heart — he was working here two years ago before he saw the light and came to CMBC –, the rustic exposed brick and fire pizza oven make Goodnight Irene’s feel like home.

That is, if your home also has lines (and lines… and lines…) of tap handles.

We went down there this week with Richie and Director of Brewing Operations Jimmy Valm to catch up with Beer Manager Jim Dickenson.

“We have a shitload of good beer,” Jim says. He’s been at Goodnight Irene’s for nine years, entrusted with curating that wall of taps. “If we can get our hands on it, we’re trying to pour it.”

When we were there, they had 12 Jersey beers on tap, including two dedicated CMBC 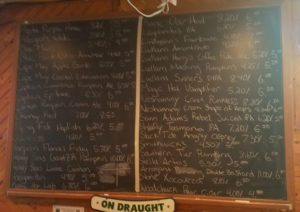 lines. They’ve got Coastal Evacuation on “90% of the time,” Jim says, but rotate out our seasonals and flagships.

“We had Summer Catch on all summer,” he says, “we killed it with that.”

Jim takes pride in keeping our brews cold and pure. “We’ve got a direct-draw box and a walk-in behind the wall. It’s pretty dope because our longest line’s only like five feet,” he says. ”Everything stays clean, fresh.”

Owners Dave and Laura Stefankiewicz opened the bar in 2007, naming it for Dave’s grandmother… and the blues standard first recorded by Huddie “Lead Belly” Ledbetter in 1933, and eventually 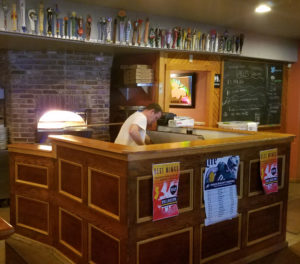 covered by nearly every musician worth his salt ever since. (According to Jimmy, the Tom Waits version is ”awesome.” We’ve linked it for you below.)

They’ve got a killer menu with some non-traditional tavern fare like Southwestern Eggrolls and Angry Shrimp (in Buffalo sauce), as well as your more conventional sandwiches and burgers. Their claim to fame are their fire-oven pizzas: with such creations as Pear Prosciutto, Crab and Tomato, Meatball Gnocchi, and Clams Casino, if you’re not sold on the brews, the pizzas are worth a visit on their own.

For the most part, the atmosphere is a “laid back, corner bar,” Jim says, with a knowledgeable, friendly staff that’s quick on your refills. Goodnight Irene’s also has darts and shuffleboard, beer pong on Saturdays with a $100 prize for the winner, and Quizzo every Thursday night. 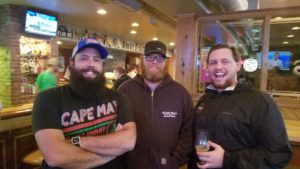 And an “awesome jukebox,” according to Jimmy. “There’s a bunch of Tom Waits, so it gets my seal of approval,” he says.

The place gets hoppin’ late night. “It definitely gets rowdy in here after one am. We’re open till three every day, and we serve food pretty late,” Jim says. The kitchen’s usually open till 11pm on weeknights and midnight on the weekends, so there’s plenty of time to get your fill of those fire oven pizzas.

What do you think of this new series? Goodnight Irene’s is the first installment in our Spotlight On… series — we hope it’ll prove to be one more way to learn about CMBC brews, enjoy our beer outside of our Tasting Room, and find your new favorite watering hole. Please, let us know what you think in the comments.

Next up: Congress Hall!