…no new taxes.” — Former President George H.W. Bush before being elected and raising taxes like it was goin’ outta style….

The New Jersey Assembly is looking for ways to raise revenue for improvements to schools with high levels of lead in their drinking water.  Without question, a noble cause, but, in true New Jersey fashion, they’re looking to do it in the most short-sighted way imaginable: a bottle deposit.

Since modern recycling efforts have been established, no state has actually instituted a bottle deposit.  Most, in fact, have abolished theirs, finding that they make no sense at all.

“We definitely shouldn’t be poisoning our children,” says Ryan, “but Cape May Brew Co. would effectively have to turn into a recycling center.  We’re not remotely equipped for such a thing, and it would cost us thousands of dollars to make happen.” 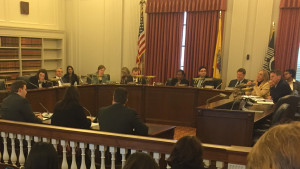 So, he flew up to Trenton to testify before the Assembly committee.  His testimony has been quoted by Newsworks and Politico New Jersey, among others.

Ignoring the fact that this little endeavor only raises revenue if people don’t return their bottles to get their deposit back, the bill passed through committee.  Ryan intends to continue to work with the sponsors of the proposal as it goes to the full Assembly for a vote, having met with counsel from the governor’s office to discuss the future of the legislation.  Gov. Christie has indicated that he’s likely to veto the measure.

The bottle deposit lent itself to great sitcom fodder in the 90s, with Seinfeld taking jabs at the possibility of making a killing by returning thousands of bottles.  Newman and Kramer might love the bottle deposit, but the sitcom world and the real world rarely occupy the same universe.  Except, apparently, in New Jersey politics.