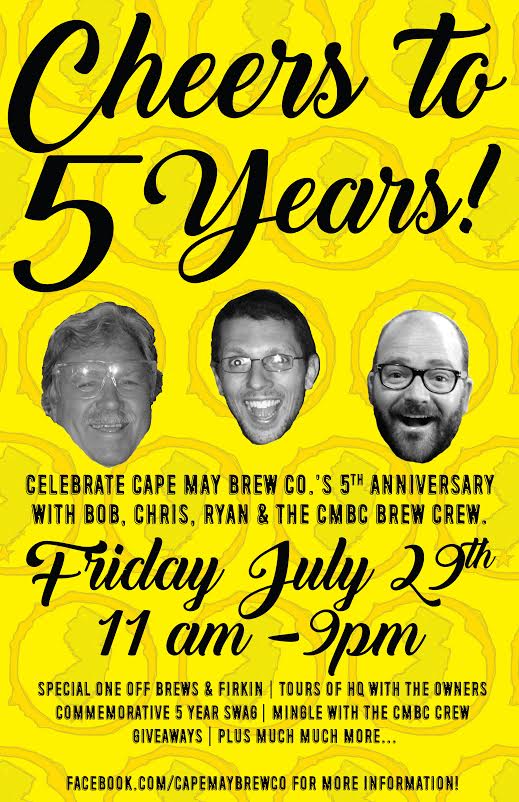 July 4th isn’t just a banner day for all of America, it’s a great day for the universe, for that’s when CMBC first burst onto the scene.

Can you believe it?!? Five years. A lot can happen in five years. There are nations that exist today that didn’t when the brewery was founded. (By five days, but still.) There are a bunch of four-year-olds who’ve never known a world without CMBC brew. (We judge their parents.)

But on Friday, July 29th, we’re gonna get down and get funky! (Brettanomyces-style.) We’ll be partying with giveaways, special merch, and, of course, beer.

Wayne and Garth won’t be there, but your favorite staff and Brew Crew members at CMBC will be. Memories will flow like… well… like beer. Because that will be flowing, too. Because, you know, that’s how we roll.

We brewed a special beer for our five-year anniversary, too! Anniversary Ale 5.0: the next wave in our quarterly double IPA project, we’ve brought together the slightly malty finish and piney and floral notes of the IPA with the hint of dankness and citrusy aroma from Coastal Evacuation. It won’t be on for long, but you’ll wish we’d been brewing it for the last five years.

You’ll get the chance to enter a drawing for a gift basket with a $100 value, as well as down a sneak tasting of the latest release in our Barrel Aged Series. Guests will be able to grab a commemorative pint glass with a tasting while relaxing in CMBC’s new, expanded beer garden. Special one-off recipes will be designed by each of the founders, and a Flagship Five-Year Firkin is in the works, showcasing one of our flagship brews.

It’s also the grand opening of the Brewtique! As you know, it’s been open for a bit, but we never really did this thing in style. To celebrate, we’ve got 5% off all swag on the 29th, as well as a whole line of new merch — including a 5-year commemorative jersey.

And the growler filler is up and running! It’ll fill your growler in under a minute with no waste (thank goodness!) and minimal oxygen seeping into your precious brew.

This is a rager for the ages. It’ll make Wayne and Garth proud.