Five Things We’re Excited About in 2015

Ah, the beginning of a new year. It’s a time to reflect — perhaps over a Honey Porter — on events past. At Cape May Brewing Company, a lot’s gone down.

We launched in July of 2011 with an airport hangar, a used Quizno fridge that smelled of deli meat, and a 12-gallon pilot brew system concocted from scrapyard keg shells, hot water heaters found on eBay, and stainless steel tanks dug out of Jersey recycling plants. To our, ahem, one client, we delivered beer in a hand-me-down Mazda MVP. (Yea, that’s a minivan alright.)

But since then, Ryan Krill and Chris “Hank” Henke, our intrepid owners/good booze

ambassadors, have taken steps – like adding a tasting room, updating equipment, and landing a distributor — to prime this beachside brewery for world domination. Or, at least, putting south Jersey’s craft beer scene on the map.

Other brewers told us it couldn’t be done. They said everyone “down the shore” drinks bottled lite beer only. But we’ve forgiven them — after all, not everyone knows how good an IPA tastes in a place with salty ocean breezes.

Now, we’ve got upwards of 200 clients (not counting that random guy who drove a CMB keg to North Carolina before serving it illegally) and over 40 recipes on our docket. But we’re only getting bigger.

Shooting for Six in Six

In January of 2013, brew master Brian Hink entered our tasting room, and his first thought was: “Holy shit, how do you guys have 12 beers on tap?”

In Jersey, a double-digit offering at a craft brewery is considered “insane.”

You’re more likely to see three or so regulars on a tasting room menu, with a seasonal selection rotated in for good measure.

And yet, 12 ain’t nothing compared to now.

Brian has helped expand our selection, so that there are at least 20 beers available at any given time. Excuse us while we brag about our baby — we’ve got the largest on-tap variety of any tasting room in the state, and we’re only looking to grow.

Enter our upcoming production schedule: Six new beers in six weeks (released every Thursday beginning 2/19). Add to this the tasty concoctions put out every hump day for “One Off Wednesdays,” and you’re looking at 12 new beers in half as many weeks.

“Variety is the spice of life,” says our guy Chris. But he’s not referring to the less-than-authentic type of variety some other breweries pass off as choice. In those cases, the same yeast strain might be used to create beers that are merely tweaked to be different from each other via extra hops, blended fruit, or aging. “Whereas, we’re not afraid to buy the right ingredients,” says Chris. “For our recent Biscuits and Honey ESB, for instance, we used four different yeast strains and four different grains to get the style just right.”

And those upcoming six beers? They’ll be just as distinct, ranging from a light-bodied Citra Pale Ale (2/19) to the cidery Apple Bomb (2/26), to a clean and malty lager called Bringing Sexy Bock (3/5), to a Toasted Coconut IPA (3/12), to the beautifully bitter Take Five Session IPA which Brian’s been dreaming up for a over a year (3/19), to the dry and complex Cape May Saison (3/26).

All of this brewing isn’t merely about pleasing customers, although that’s a nice bonus. What can we say? We’ve got a passion. Hell, Brian spends his Saturdays making beer at home. “And I find myself spending my commute, which is 45 minutes each way, brainstorming new ideas,” he says.

Watch this space for his next lightbulb moment. And be extra careful if you see him on the road. He’s clearly a distracted driver. 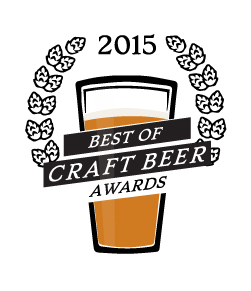 Beer Commercial Has Congress All Hopped Up

Sure, this past Super Bowl may have been one of the most exciting in history, but for many beer lovers, the game took a backseat to the $9 million dollar Budweiser ad that praised macro brews for their rugged drinkability, and poo-poo’d the micro world for appealing to fussy girly-boys (we’re paraphrasing).

While Bud is standing by its commercial, the backlash was swift and fierce. Some bars are now refusing to carry beverages made by parent company Anheuser-Busch InBev, while craft breweries are busy releasing parody ads of their own, complete with puppies. On social media, a Wall Street Journal piece published a few months ago is once again making the rounds, because it suggests the commercial’s genesis may have been insecurity – research shows 44 percent of drinkers between the ages of 21 and 27 have never so much as tasted a Bud. If nothing else, critics say, the ad is hypocritical, considering AB InBev is muscling its way into the craft market by buying up the nation’s most successful small breweries.

But a snarky reaction from the Twittersphere? That’s just par for the course. The medium is also where people go to criticize Uma Thurman’s face and Taco Bell burritos, so nothing is sacred here. A more fair gauge of just how many buttons the commercial has pushed? The reaction of Capitol Hill.

Lawmakers on both sides of the political spectrum have been irked by the ad, meaning Budweiser has done the impossible – united Republicans and Democrats in mutual annoyance. The company “seems to have forgotten that the craft beer industry has a lot of allies in Congress,” reports Daily Beast writer Matt Laslo. Case in point: the existence of the House’s bipartisan Small Brewers Caucus, which makes experimental brews sound as American as apple pie. God bless the USA!

The Bud commercial lit such a fire under these politicians that, less than 24 hours after its airing, they reintroduced legislation meant to protect the little guys, Laslo reports. The Small BREW (or Brewer Reinvestment and Expanding Workforce) Act would “drop the tax rate per barrel from $7 to $3.50 for the first 60,000 barrels a brewery churns out. It would then save small breweries an additional $2 on every barrel until they hit the magical two million number.”

Of course, politicians with vested interests in the macro world are pushing back with the Fair BEER (or Brewers Excise and Economic Relief) Act, which argues that the big guns are deserving of such protections as well.

While the House fights it out, we’ll make a suggestion to Budwesier: stick to Clydesdales.

Last Monday, veteran Press of Atlantic City reporter Rich Degener stopped by for a story on our ongoing expansion. He showed up in his signature unassuming dress —complete with a duct-tape chic jacket — and spent over an hour checking out our new setup. He tasted the product, scrawled copious albeit totally illegible notes, and told us that his daughter Elizabeth (who sells the delicious homemade bread on Sunset Boulevard) loves our tasting room, which is awesome, because we love her bread! You can see Rich’s article here. Just a couple of small corrections: the money spent on gutting and renovating our new space (called HQ for ‘headquarters’, until someone around here comes up with a name more clever) was actually closer to $1,000,000 than half a million, and our fearless leaders attended Villanova University, not Temple. No offense against the Owls – we’re all Philly proud!