Our New Release Is The Bomb

It’s sounds like the episode of a sitcom: sweet mother makes apple butter for her family with huge pots in a suburban backyard and is mistaken for meth lab operator. But that’s exactly what might have happened to the mom of our guy Chris — she remembers a state police helicopter circling above her house during one of her frequent apple butter cooking marathons. And yet, more has come out of her recipe than a funny story… this was the inspiration for CMBC’s Apple Bomb beer.

A few Christmas seasons ago, in our original 12 gallon brew house, we also cooked apples down until they reduced to a butter, and we tossed the fruit of this labor (womp, womp) into a fermenter with some cinnamon and apple juice concentrate purchased from ShopRite. The resulting brew was so popular, we decided to do it again and again… and again. Each time, we’ve refined the process because, well, let’s just say we’ve experienced some funny stories of our own.

“The name for the beer came about because, in the early days, we underestimated how easily the sugars from 55 gallons of juice would ferment, so the fermenter kind of blew up,” says Chris. “The floor of the brew house was covered in two inches worth of foam.”

But no worries – the beer itself was delicious, and CMBC’s Apple Bomb has only gotten tastier since. Just not in the way you might think.

“It’s one of the hardest beers to describe,” says Brew Master Brian. “With a name like Apple Bomb, you expect it to be a cider, which is a lot like alcoholic apple juice. But this still tastes like a beer.” 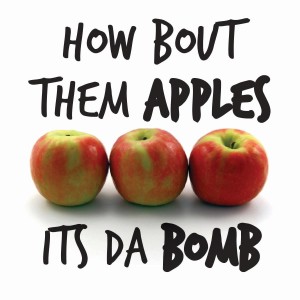 ure, the fruit lends a little bit of tartness, but not so much that the hop note is masked, or the biscuit malts don’t come through. That’s because, unlike with a cider, all of the apple juice that goes into this beverage is converted to alcohol – hence the 8% ABV.

For your drinking pleasure, we’re releasing it Thursday, February 26 (it’s the second in a six-new-beers-in-six-weeks series), so come check it out in our tasting room. You know what they say: an apple beer a day keeps the doctor away, or some such thing.

As for Chris’ mom? She’s still operating her “lab.” Says Chris: “I’ve got apple butter in my fridge from three years ago.”