Music in the Brewhouse 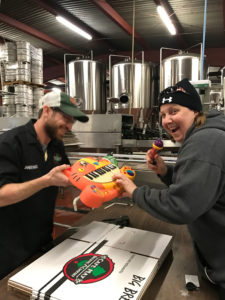 A visit to the brewery is a feast for the senses. We tickle your taste buds in the Tasting Room and give you glorious sights in the Brewtique, but on a visit to CMBC headquarters, your other senses are piqued. The smells of brewing beer are — to put it mildly — the greatest single aroma on the planet, and your ears are in for a treat, as well.

We don’t mean the sounds of a working brewery. The music in the brewhouse is On. Point.

On any given day, you can hear just about anything coming out of the brewery. From Jock Jams to classical, the Spotify playlist in the brewhouse looks like it was curated by a music lover with a hatred for logic and sanity.

In the interest of journalistic excellence, we wanted to get to the bottom of the story. You know, for science.

So, we got together with Brewer Mark Graves and Cellarman Mike McGrath to get the lowdown on the music downloads.

It’s pretty much first-come-first-served in the brewhouse. Whoever gets to the computer first gets to set the mood for the day.

“We try to keep it a little low-key in the morning,” Mike says. “Make sure everyone’s awake.”

But that seems to change throughout the course of the day, depending, of course, on that day’s activities.

“When you’re bottling,” Mike tells us, “it’s usually something a little more upbeat, something that everyone knows and can sing along to. Kinda keeps the day going.”

Last month, when we received our most recent fermenter, “Eddie ran over and put on ‘Push It’ while we were moving it,” Mark tells us.

“When I run the centrifuge,” Mike says, “sometimes I’ll put on the Fugees, ‘cause it looks like ‘centrifuge’.”

“How about ‘You Spin Me Right ‘Round’?” Mark asks. (Man, that lyric has been getting a lot of play on this blog, lately.)

“Every once in awhile we have an emo day,” Mark says. “We’re just, like, carving into our arms, crying.”

Even the particular beer being brewed will dictate what gets played.

“I know when Mark was brewing Sexy Bock,” Mike says, “he put on Justin Timberlake.”

“We probably put it on, like, five times throughout the day,” Mark said. “It was like, ‘Okay, the song’s finally over,’ and someone would put it back on. We were like, ‘NOOOOO!!!’”

At times, the music will reflect the attitude of the guys that day.

“Sometimes,” Mike tells us, “if things aren’t going well, the music’ll just get angrier and angrier as the day goes on.”

“For example, bottling days are sometimes frustrating,” Head Brewer Brian Hink says. “We’ll go a month with perfect runs every time, then out of nowhere we get a ton of breakages and stops and starts and everyone gets frustrated at the lost time and headaches of it all.”

When all of the guys are occupied on the bottling line, the music selection will be Brian’s choice.

“He’s a big believer in Jock Jams,” Mike says, referring to the pumping-iron mix used by bodybuilders in the gym. “It’s funny,” he says, laughing, “but after the 25th time, it’s not that funny.”

If no one has a better suggestion of what to listen to throughout the day when Brian asks, “you’d better answer him or Jock Jams is going on,” Mark says.

“The Jock Jams come out if we need a laugh or to keep the energy up,” Brian tells us.

Mark tends to lean toward alternative rock, metal and screamo, and, oddly, classical.

“Me or Brian will throw on some classical every once in awhile,” Mark says.

There are some artists that are off-limits. No Creed. No Nickleback. Because these are men with souls and working eardrums in the brewhouse.

“Anything that [Director of Brewing Operations] Jimmy [Valm] plays is off-limits,” Mark jokes.

Jimmy’s definitely got some eclectic musical tastes, but banishing him entirely seems a little harsh, Mark.

“But it goes both ways,” Jimmy says. “Mark may not like my punk/country/Tom Waits-laden playlists, but you can hear me groan from across the brewery whenever his Linkin Park/Blink 182/Coldplay shite goes up!”

“I don’t think anyone likes country,” Mike says — oddly, able to anticipate Jimmy’s reaction before we’d even asked for one.

In a normal work environment — and, believe us, there’s nothing normal about working at a brewery — the music selection could cause fights and consternation among the workers. Not at CMBC, however. The guys don’t fight over it as much as they recognize the need for opposing musical viewpoints. They also recognize the fact that they have legs and can walk over to change the music whenever they want.

There’s an understanding among the guys that there’s a four-song limit. “After the fourth song you can change it,” Mike says.

But some men just want to watch the world burn.

Whatever Brian and Jimmy are doing out there, they’re doing it right. Not only does music make the days go faster, but it hath charms to soothe the savage beast. The guys have the right jams going to brew great beer.