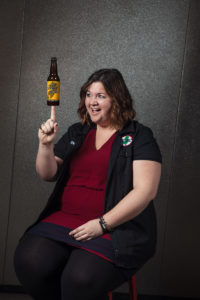 Born and raised in the area, Courtney’s been at CMBC for almost three years — one of our longest employees. After high school at Lower Cape May Regional — just a stone’s throw from CMBC — she put in her time at Moravian College in Bethlehem, PA. (Go Hounds!) An ex-goalie and lacrosse coach, when she’s not working her butt off for us, she’s probably either watching Parks & Recreation or dreaming about Jeeps that are older than she is.

She’s one of our biggest cheerleaders and best fans. Be sure to say hi the next time you’re down!

I AM FROM…  North Cape May, New Jersey

THE GREATEST ADVENTURE I EVER HAD WAS…  College.

MY FAVORITE HOBBY IS… listening to new music and going to concerts. Also Snapchat filters.

THE LAST TIME I LAUGHED UNTIL I CRIED WAS… Monday hanging with Zack and Jim outside on the patio. Lots of laughs all around.

THE SUPERPOWER I’D LIKE TO HAVE IS… The ability to make everyone happy on their worst day. Also the superpower of paying off my student loans with just the snap of my fingers. Woof.

MY FAVORITE MOVIE OF ALL TIME IS… Wet Hot American Summer.

MY FAVORITE CARTOON IS… I don’t really have one. My favorite TV show though is Broad City. Chuck, our Brand Ambassador, always tells me I’m more of an Abbi.

THE BEST PICKUP LINE I EVER HEARD WAS… Uhhhhh just look up Tinder Nightmares on Instagram. They all win.

THE MOST FAMOUS PERSON I’VE EVER MET WAS… In my ranking: 1. Tina Fey 2. Ana Gasteyer 3. Chris Carrabba from Dashboard Confessional

MY BIGGEST PET PEEVE IS… When someone who is older than my generation doesn’t show manners because they assume that we don’t have any. Excuse me/Pardon me goes a long way.

THE BEST ADVICE I’VE EVER RECEIVED IS…  Everything happens for a reason. I live by that saying.

IF I WERE AN ANIMAL, I WOULD BE… Capybara

I WAS DRAWN TO CMBC BECAUSE… Ryan Krill. I was waitressing at the time and at that point Ryan was still delivering kegs in the Mazda Minivan. Ryan delivered a keg of Alt Bier and sat the waitstaff down to educate everyone on what we were trying and would be selling. When everyone was finished our shift, we went over to the brewery and I fell in love with the atmosphere and the staff. The rest is history…

IF I HAD TO NAME A CMBC BEER TOMORROW, I WOULD CALL IT… Anything with a Taylor Swift or Broad City reference 1. Never Gose Out of Style 2. Yasss Kween

IF I WERE A CMBC BEER, I WOULD BE… Foreshore Shandy. I created it. I like it. It’s me!