Okay, maybe not.  Nonetheless, we use only the freshest ingredients, and that means buying local — because hops that have been in a truck for three days are really very, very bad hops.

Furthermore, we love to support local businesses, because they love supporting us.  And when doing so only makes our beer BETTER?  Ho-kay…. Twist our arm…. 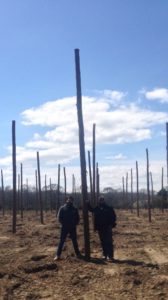 “As soon as we drove up we realized this was no Mickey Mouse operation,” Jimmy tells us.  This six acre farm has 176 hops trellises spread out over two of those acres.  Hops, for the uninitiated, grow on vines (called “bines”) that can grow up to 25 feet and weigh over 20 pounds.  Requiring trellises for support, the trellises at Fincas del Mar are white cedar poles from a local swamp clearing.

“Setting up the trellises is pretty labor-intensive,” says Lauren Samson, who, with Sean, is half of the husband and wife team running the farm.  “You have to be dedicated to grow hops.”

Sean, a Marine Corps veteran and former environmental professional, and Lauren, a certified holistic health coach and yoga instructor, returned to their home state after a stint in California, learning the farming biz.  “I’m from the Cherry Hill area and Sean is from Maple Shade, so we wanted to return home to be among family and friends.”  And grow some good hops!

They’ve got five organic strains — Cascade, Centennial, Chinook, Columbus (Zeus), and Nugget — from Oregon.  “New York was sort of the hops capital before the rain moved it out West.”  But Fincas del Mar has the perfect soil for hops.  “We didn’t have to do anything to it.”

They’ll be working with a few area breweries, including Slack Tide and Flying Fish. “With the yield they should get, there’s no way we could take it all,” Jimmy said.

But, as Lauren says, “I love your beer!” preferring our Belgian Tripel Wreck, while Sean is partial to the IPAs.  (No wonder he decided to grow hops!)  “You’re right on the way home from the farm, so it’s a little too convenient.”

The Samsons are currently working on their organic certification, but are looking to farm an assortment of organic vegetables including arugula, peppers, cucumbers, carrots, and, of course, tomatoes. Committed to environmental sustainability, “We’re planting a tree to replace each trellis pole, so we’ve got 176 trees to plant over the next few years.”

“They’re great, down-to-earth people who are serious about this and really know their stuff,” says Jimmy.  “We will definitely be doing a wet-hopped Harvest IPA in the late-summer and probably a few other special brews with their hops.”

Sounds like another match made in beer heaven!  We’re looking forward to a long relationship with Sean and Lauren — we reap their hops and you guys reap the benefits.