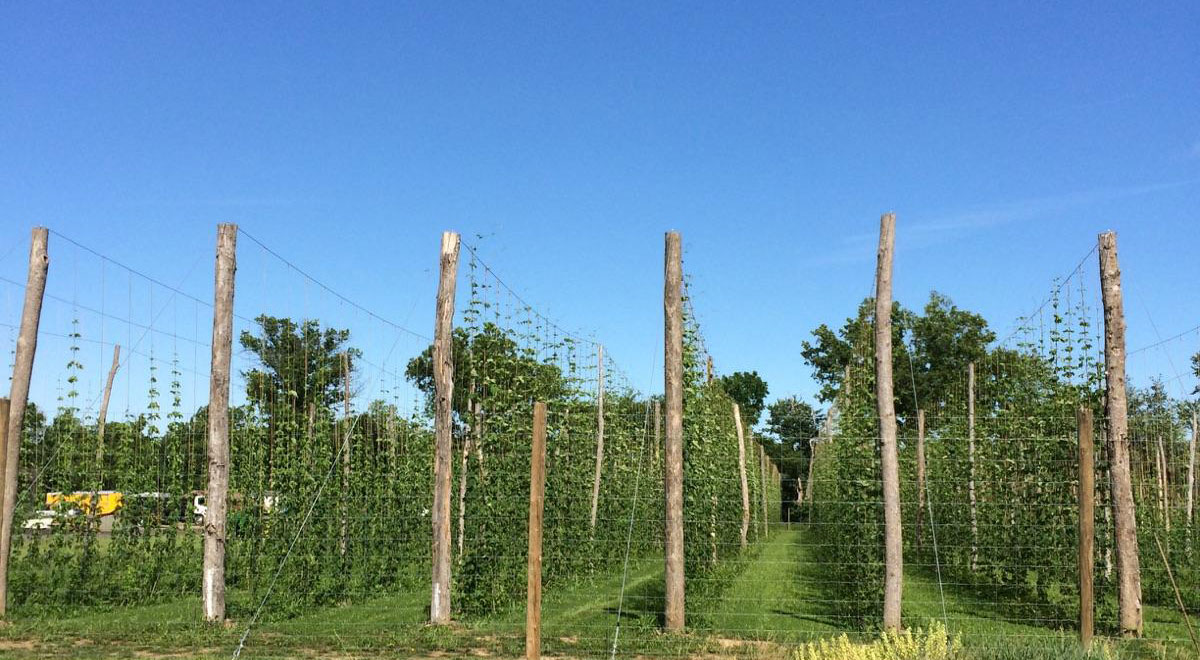 Mike Kane is the root of Three Plows.

As we’ve been covering the production of this beer — indeed, even as the guys in the brewery were planning this beer — we’ve found that the major drawback to the concept of a beer brewed with entirely New Jersey ingredients has been the considerable lack of hop production in the state.

Thankfully, this former union bricklayer and commercial fisherman got the wild hair of an idea to start growing some hops. After laying brick for 16 years, Mike picked up and moved to Maine. While there, he became friends with some organic farmers who turned him onto hops as a potential cash crop. So, he moved back home and bought a hay farm — Big Oaks Farm — eventually turning Laughing Hops into the largest hop yards in New Jersey.

Mike’s got 15.2 acres up in Pennington, of which a little over two acres have 188 poles with glorious hop bines twisting among them.

Let that sink in for a minute: the largest hop producer in the state is doing it with fewer than three acres.

“I’ve always had an affinity for growing things — I love to grow stuff,” he tells us. “But there’s a lot more work involved than I really had contemplated.”

This is an understatement. 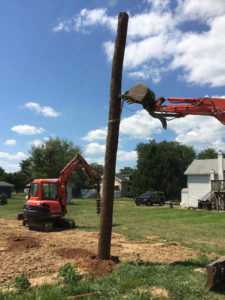 Growing hops is not the easiest thing in the world to do. First, the hop bines need support — if they don’t have a structure of some sort to grow on, they don’t grow. So Mike needed to get those 188 poles — and they don’t come cheap.

In addition, hops are delicate little things. They’re susceptible to humidity-driven disease, and, as you probably know, summers in New Jersey are insanely humid — on a hot summer day, the humidity can be oppressive for a human, much less a little hop cone. Mike’s had to deal with “downy mildew” — a microbe that can be devastating to hops.

“It’s a manageable disease,” he tells us, “it’s just expensive to spray for and any leaf litter or anything that falls off, we really need to clean all that stuff up because the spores will overwinter in the ground, and then next year, they’ll come back. Yesterday I was in the process of literally cutting everything to the ground, raking it all up, and putting it into a big pile so I could get rid of that.”

Hops also need a lot of water and nitrogen. “They require about an inch of rain a week,” he says. “I’m lucky enough here at this farm that I have a big, two-acre pond. I’ve just now gotten the hard pipe from the pond up to the poles. Last year, I didn’t have any irrigation, and that was a big drawback for me. I didn’t lose crop from it, but I didn’t get nearly as much as I should have.”

Yet again, this is an understatement. Mike should be able to produce about 2,000 pounds of hops. He got about 250 this year.

Two of his five varieties of hops were completely unharvestable — his Willamette and Centennial hops were useless. (No, not the Centennials!) Nonetheless, he was able to provide us with all of the Magnum, Chinook, and Nugget we needed for this iteration of Three Plows.

“It’s been a big learning curve for me this year, but I’m getting there.”

And he’s got time. It takes about three years for hops to come to maturity. The first year, you get bupkis. The second, you’re at about 50% of production. So, by next year, Mike will be flush with hops. Hopefully. “As long as they’ve got water and they’ve got nitrogen and you can control disease, you should be good.”

Furthermore, to get hops from the ground and into your delicious brew takes a lot of infrastructure. In addition to the poles, harvesting the plants from eighteen feet in the air is a challenge — Mike built his own basket/ladder combo and sets it up on a tractor. 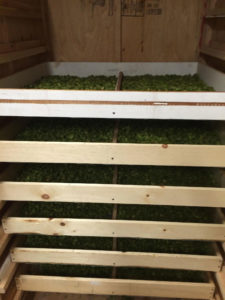 From there, the cones need to be separated from the leaves, then dried. He’s built his own driers, as well — basically little drawers with chicken wire and heaters. Then, they’re either vacuum packed whole and frozen or ground in a hammermill and pelletized.

Like most breweries, we use pelletized hops. They dissolve better, you get a better hop flavor in the finished product (what we call “utilization”), and it’s easier to clean the kettle and fermenters afterwards. Mike is the only guy in the state with a pelletizer.

Regardless of these barriers, Jersey’s making good hops. You know, you can take a tomato plant from New Jersey, bring some soil with you and move to California, but you’re still not going to get a Jersey tomato. They’ll still turn out to be those orange things you find in the supermarket in January.

Same deal with hops — they take on characteristics of the area in which they grow, known as the “terroir”. Jersey just has the right combination of climate, latitude, and soil to make some extraordinary hops.

“It’s definitely a much fresher product when it’s locally-sourced.”

Hopefully, Mike’s success will create more interest in hop production in New Jersey, and with the success of the recent Audubon Society event in our Tasting Room, bringing together hop producers and other farmers, we think it might. Mike agrees. “Since starting this yard two years ago — I think I was number four or five in New Jersey to start a hop yard — I’ve seen at least half-a-dozen other hop yards go up in the area. But, small — quarter-acre, half-acre.”

Ultimately Mike’s plan is to devote more of his farm to hops. “I’ve got about ten or eleven more acres that I could plant, but the infrastructure costs and the startup costs for everything here was so much money — and me not having a real good farming background and all of the challenges that I had this year, I really want to plant next year, but let me manage what I’ve got now and get it going to where I can hold onto it.”

Keep making them, Mike, and we’ll keep taking them.

As for Three Plows, Mike’s thrilled to be a part of it. “I was kinda blown away by a ‘big brewer’ like Cape May — in my eyes, you’re a big brewer. I think it was a great opportunity for me, and I’m quite humbled by it.”

We’re loving Mike’s addition to the brew thus far, and we’re sure you’ll agree. Get down to the brewery when Three Plows releases on November 10th.

And if you should run into Mike, thank him. Without him, this brew would never have come to pass.