Last Monday, members of our management, production, and tasting room crews took part in a beer-tasting training session put together by Head Brewer Brian Hink. Sounds awesome, right? We mean… what could be bad about drinking on the clock?

Here’s the catch: it was an off-flavor training session. The goal was not simply to sip and savor, but to familiarize our senses with six common, sometimes unsavory off-flavors that show up in beer, so we can better decipher them, and better understand the important roles they play (because some of these off-flavors DO, in fact, play important roles).

In other words… anyone up for a hint of stomach bile?

A video from the renowned Cicerone Certification Program walked our team through the basic mechanism of flavor perception. And here’s the takeaway: Taste isn’t down to the tongue only.

“Olfactory sensations are processed in such a way by the brain, that we end up believing all flavor comes from the mouth,” explained our trusty narrator. “But the nose is just as important.”

With this in mind, we went over various ways to smell a beer before drinking it, to make sure we’re always receiving the full taste experience. The idea is to try out each method, and find which works best for you:

Then, our staff each received six small pours of Yuengling Lite beer, all infused with a different off-flavor, plus a control tasting. After that, we swirled and sipped. Our directions were to look to our past experiences for help in labeling the flavors we perceived. And this led to just a little bit of class-clowning, with statements like:

“I’m getting a lot of purple here…”

But, for the most part, we took it seriously and had a good time comparing notes. No worries… we took some for you.

Diacetyl (2,3 Butanedione): A desirable flavor in some ales, stouts and lagers, this can also be the not-so-desirable by-product of rushing a brew schedule. It takes like liquid butter or, more specifically, buttered popcorn.

DMS (Dimethyl Sulfide): A desirable flavor for some pale lagers and ales, this can also be the result of bacterial contamination. Although unusual in commercial beer, it does happen. You’ll know it if you smell spoiled shellfish, or rotten vegetables.

Acetaldehyde: Present in all beers, and signature in some, it can also be a buzz-kill at high concentrations. Think emulsion paint, green apples, or — our guys said — PVC pipe glue.

Lightstruck (3-methyl-2-butene-1-thiol, or 3MBT): This is the result of light exposure, either real or fluorescent. Many people don’t find it that off-putting; others can’t handle the skunky aroma.

Papery (Trans-2-nonenal): This is one of several flavor compounds associated with too much oxygen getting into a beer, and it can turn your beverage into liquid cardboard within 24 hours. That’s what we call a bad day’s work.

Infection: A scary name indicating a bile, or stomach acid-flavoring due to dirty draft lines. Some sour beer fans may not be put off, due to the vinegary taste.

Remember: None of the bacteria that lives in beer will make you sick, but it does change flavor. So, may your next pint be on point and off-flavor free. (Unless you like that sort of thing, of course.) 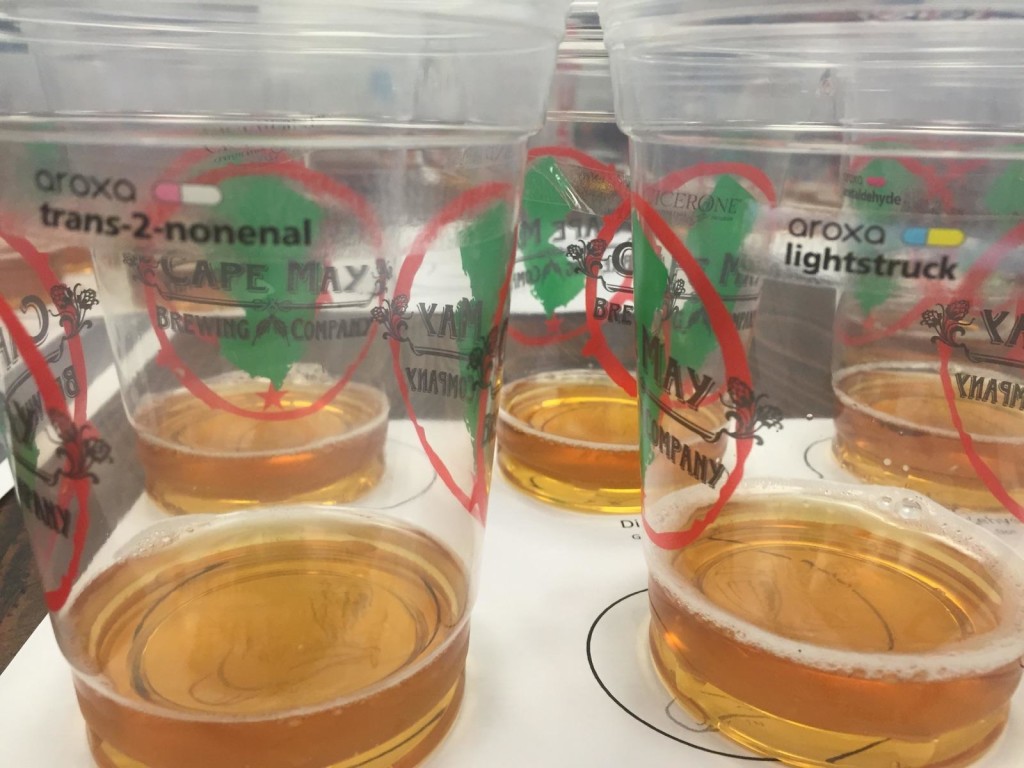