Call Us
Find Us
Menu
“We wanted to make the 325th anniversary something special.”
Cape May County, Local Interest

Beer has been helping people to celebrate for millennia. We’re definitely of the opinion that it’s by far the best of the celebratory beverages — champagne be damned! That’s why when someone we love asks us to help them celebrate a milestone by brewing a beer, we’re happy to give it the consideration it deserves.

But when Cape May County asked us to help them celebrate their 325th anniversary, how could we say no?

“We wanted to make the 325th anniversary something special,” says Diane Wieland of the Cape May County Department of Tourism, “and Cape May Brewing Company makes such an effort to be part of the community, we thought it was a natural fit.”

It took us five years to be able to put our Core Value of Being a Good Neighbor into words, but we’d been doing it since we started here. It’s very gratifying that the County recognized that and asked us to help with the celebrating. 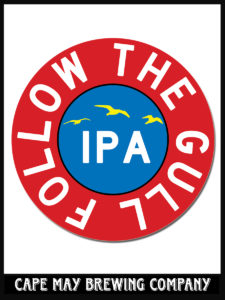 So what’s this beer going to be called? Quasquitercentennial Ale? (Please, please no! We love Villanova, but “Demisemiseptcentennial Ale” is enough Latin for one brewery in one year, thank you very much!)

We sat down to think about all of the great things about Cape May, and we came up with one of the County’s more ubiquitous images: Follow the Gull — named for the signs leading travelers from Cape May to Atlantic City along Ocean Drive, connecting our seven major shore towns.

A lot of us at CMBC are Cape May natives, and, if we had the misfortune of being born elsewhere, we’ve got a love for Cape May that simply can’t be attributed to mere geography. But for the natives, this beer is certainly something in which they’ve found quite a bit of pride.

Our Head Brewer, Brian Hink, spent his entire life in Cape May County, even though he’s since moved north aways. “I think of this beer as a celebration of all the growth the County’s seen in recent years,” he says. “More and more local restaurants are opening and thriving, our tourism is at an all-time high, the local culture is better than I’ve ever seen it, it’s a great time to live in the area.”

And Cape May Brew Co has been at the forefront of that growth for the past five years.

325 years is a long time. Cape May County was created on November 12, 1692, by an Act of the General Assembly of the Province of West New Jersey, along with Burlington, Gloucester, and Salem counties. The original boundary encompassed all of the peninsula of Cape May, as well as parts of present-day Cumberland and Atlantic counties, with the county taking its present form in 1891. 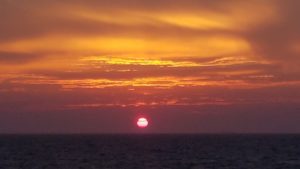 “Let’s be honest, there aren’t a whole lot of 325th Anniversary celebrations in this country,” says Director of Brewing Operations Jimmy Valm, “the US is after all only 241 years old now.  And this is ‘Merica, go big or go home, right?  So we made a big beer with ‘punch-in-the-face’ level of hops, with notes of grapefruit, lemon and orange citrus, and a touch of dank for an extra kick.”

We thought of tying the brew in with local agriculture, but early April, when we needed to start brewing this bad boy, isn’t exactly harvest season. Make it boardwalk-themed? A good idea, but Foreshore Shandy is already snow cone-inspired, and The Bog would be coming out around the same time — both delicious summertime treats.

“325 lbs. of hops in one beer is a lot for us,” Jimmy says. “Like an insane amount — almost twice as much as Coastal Evacuation.”

Dealing with that amount of hops presented quite a few challenges for the guys in the brewhouse.

“It would’ve been easier to make this amount of hops work for a Double IPA instead of a lower alcohol IPA/Pale Ale,” says Head Brewer Brian Hink. “It took a good amount of work for me to dial this in and get it where we wanted it to be. Too many hops on the hot side, your IBUs go way up. The wrong combination of hops in the kettle and you’re left with a hot mess of a hop profile.”

Jimmy agrees. “A beer with that amount of dry-hopping can only be done once in a blue moon; the procedure of getting all of those hops into a fermenter took days to do to ensure that we maximized the aroma extraction.”

Brian actually worked backwards on the recipe for Follow the Gull, “figuring out the dry-hopping first — figuring out which blend of hops would nicely complement each other and not let one shine out above the rest.”

This brew has a beautiful melange of hops. “It has some of our favorite hops in it,” Jimmy says, “including Cascade, Citra, Amarillo, El Dorado, and Azacca, making for a very complex and multidimensional hop profile.”

Not only does Follow the Gull have 325 pounds of hops to tie into the anniversary, but it has 3,250 pounds of malt, as well.

“That amount almost came by accident,” Brian tells us. “I designed the beer to be 5.5% ABV with a certain body in mind, and it was like 3,240 pounds or something like that, so it just made too much sense to add an extra 10 pounds to it for the fun of it being 3,250.”

We’re releasing Follow the Gull in conjunction with Cape May Tourism Week. We’ll be hosting an official dedication at the Tasting Room on Friday, May 12th, at 4pm. Officials from the County’s Department of Tourism will be on hand, as well as all of our Freeholders. The County has produced commemorative tiles, crafted by Rowe House Tiles in Cape May Court House, and they’ll have 200 on hand for free distribution at the party.

The County has a number of events planned throughout the week to celebrate. Stone Harbor kicks off the week on Saturday, May 6th with their Spring Tide Festival, celebrating the water surrounding the island. That night, Ocean City will be hosting their Spring Block Party, as well. Avalon holds their Wine and Spirits Festival on May 12, and Wildwood’s Spring Classic Car Show runs from the 12th to the 14th. Cape May ends Tourism Week with the 38th Annual Great Cape May Footrace on the 13th.

Even without the celebration for the 325th anniversary, this beer is perfect for the season. “It’s eminently sessionable at just 5.5% abv, perfect as we get into the summer season that Cape May is so famous for,” Jimmy says.

“But just as Cape May has more going on than just summers, Follow The Gull is more than just hops,” he says. “There’s a great body to it that makes it completely refreshing, but with a dry finish that makes you go back for more.”

Brian agrees. “I’m in love with this beer. I think 5.5% ABV is the sweet-spot, one where I’m not afraid to have one or two as a shift beer or being out to dinner. “

Sounds like we’ve done something pretty special to help Cape May County celebrate its 325th anniversary. Follow the Gull will be out for distribution on May 11th, so even if you’re more than a gull’s flight from Cape May, you should still be able to find some at your favorite watering hole.

If not, it looks like you’ll have to come down to Cape May and find out why we love it here so much. See you soon!