Last weekend, at the invitation of our neighboring brewers guild, The Brewers of Pennsylvania, CMBC co-owners Chris and Ryan headed to Bethlehem for the first annual Mid-Atlantic Brewers Symposium. The two-day affair was held in SteelStacks, a 10-acre venue that was once home to the nation’s second largest steel manufacturer, and featured ten 45-minute seminars run by industry leaders. The focus? A one-two punch of brewing science and brewing business, covering everything from sanitation to brewhouse technology to the trends that will move our industry forward.

Among the symposium speakers were JB Shireman, Executive Director of the Beverage Intelligence Group for First Beverage Group, an 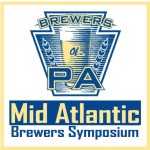 advising and investment firm for “transformational” beverage brands; Robert Seaman, plant manager for Yuengling; Dick Cantwell, Quality Ambassador for the Brewers Association who famously resigned from the Elysian Brewing Company he co-founded when they were acquired by Anheuser-Busch; and Bill Clement, Stanley Cup Champion.
“In a business climate where we often have to do more with less,” Clement said, “our personal performance as an everyday leader is crucial not only to our organization’s victories, but also our individual successes.”

We asked Dan Labert, Executive Director for The Brewers of PA, why they brought The Garden State Craft Brewers Guild in on this symposium, rather than keeping all of these seeds of wisdom for themselves [insert maniacal laughter here]. Here is what he had to say:

“With so many new breweries entering the scene, there is real value in fostering a collaborative industry. Although every brewer is in competition with others in market, there is a general feeling to focus more on creating higher quality products. This can only be done by knowing ‘who are the people in your neighborhood?’ Yes, you can sing the song from Mister Rogers. This is why associations exist. Although many focus on advocacy, the hallway magic that could develop through educational gatherings offers real return on investment. Who knows, maybe we’ll see a PA & NJ collaborative beer develop as a result of the Brewers of Pennsylvania Symposium? If so, the consumers win again thanks to craft brewers! State guilds working together also sends a message that craft brewers are united and cannot be divided. The Brewers of Pennsylvania look forward to more opportunities with neighbors on all borders.”

Proof of this collaborative mindset? Happening concurrently with the symposium was an Oktoberfest presented by Yuengling… and complete with wiener dog races. They poured beer from us as well as Flying Fish, and proceeds will benefit The Garden State Craft Brewers Guild.
Cheers to good neighbors.