Last week, Max passed away of congestive heart failure. A 17-year-old Maltese, he belonged to Mop Man, aka Bob Krill, but he was a mascot for the entire brewery.

“We had him for four years,” Bob says. “He became like a little person to us, a part of the family… even though he could be a real pain.” 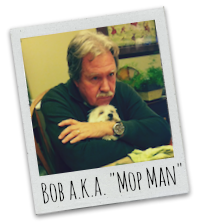 When Max used to come to CMBC, he’d growl at customers, or whoever entered the office. Hey, we never said he was a willing mascot.

But he had his irresistible charms, too.

“He loved bologna,” Bob says. “When you pulled it out, he’d do the Maltese two-step. And whenever I’d stop at a Wawa, Max expected a SlimJim. He’d jump up and down, and if you came back without one, he’d look at you like: Where’s my damn SlimJim?”

So raise your next glass to Max, forever a member of the Cape May Brewery fold.

Here’s hoping there’s a lot of beef jerky at that big dog park in the sky.