We’ve been talking about Yeast School and why it’s important for brewers for a while. After all, yeast is one of only four ingredients involved with making beer, and its arguably the most intriguing one. If this microscopic fungus were a Breakfast Club character, it would probably be John Bender — it’s got that rebellious side.

This is why we’re so excited to say that, as part of the 2015 Craft Brewers Conference happening now in Portland, CMB Brew Master Brian

Hink got his chance to become a yeast school alum. He, along with only 60 other brewers from across the country, spent the last eight hours in a seminar led by White Labs Inc, world leaders in yeast science. 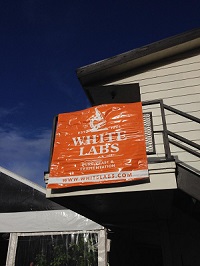 We were skeptical Bri-guy would take anything away from the day, given how much research he’s already done on the subject. But he says the lecture was, for the most part, worth his while… and not just because of the free Voodoo Doughnuts provided to attendees.

“Some things reaffirmed what we’re already doing in Cape May, some things didn’t apply to what we’re doing, and I learned some new things of course, too,” he said. “For instance, lager yeast strains gained popularity when they were first discovered because at the colder temps that lagers are fermented, potentially spoiling bacteria couldn’t take hold, meaning beer was preserved better. Conversely, at warmer ale-fermenting temperatures, bad organisms were fair game. This makes so much sense, but it wasn’t something I had considered before.”

Now, Brian has his certificate of completion. (“Yeah pieces of paper of significance,” he says), and he’s gearing up for a night of hob-nobbing with CMB Prez Ryan Krill and representatives from CMB vendor Grandstand.