Call Us
Find Us
Menu
So, to honor this lost soul, we’ve made her into a beer.
Local Interest 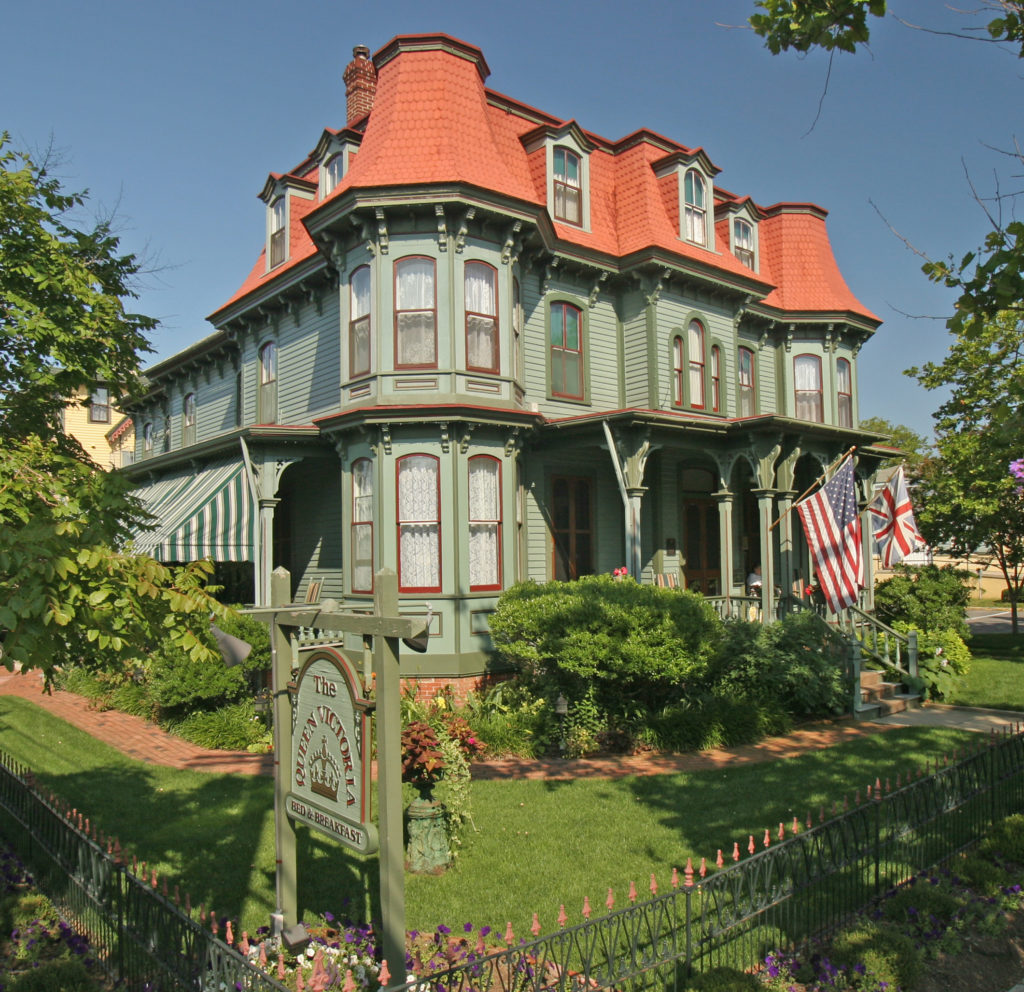 Our Barrel Aged Series has done rather well lately. The Keel and The Scupper both scored in the mid-90s at BeerConnoisseur.com, and fans have been raving about The Skeg and The Topsail.

The concept for the Barrel Aged Series has never been a one-and-done kind of idea — that would make it a pretty lame “series”! Head Brewer Brian Hink with the help of Director of Brewing Operations Jimmy Valm designed the first four that we brought out last year.

The theme of last year’s series was nautically-based. This time around, we’ve taken a bit of a different tack.

Per square foot, Cape May is probably the most haunted place on the planet. We have no data backing up that assertion, of course, but things can get a little creepy at times around town. There’ve been at least five books written about the ghosts of Cape May, MAC runs at least seven ghost tours, and Syfy’s Ghost Hunters did an episode here, Over 300 years of history combined with gorgeous Victorian architecture practically necessitates ghosts.

That’s why, this time around, the Barrel Aged Series has taken on a distinctly spooky theme. 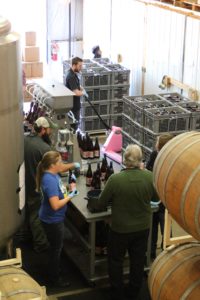 “After thinking long and hard on inspiration for this series,” says Graphic Designer Courtney Rosenberg, “I sat in the Tasting Room with our Beertender Maddie and we came up with Cape May inspired themes: birds, bikes, and ghosts.”

Maddie suggested the ghost idea, so Courtney went back to her computer and did hours and hours of research.

“These aren’t Casper the Friendly kind of ghosts,” Courtney says, “they’re ghosts or spirits that have a story at many of the locations people visit daily in Cape May.”

The Queen Victoria Inn is the crown jewel of bed and breakfasts in Cape May. Just look at that place up there! It screams opulence and comfort and luxury and wealth and could totally be haunted.

It also once housed a brothel.

Back in the late 1800s, Cape May was at its heyday. The movers and shapers of the world congregated on our beautiful sandy beaches and danced the night away among the whisperings and the champagne and the stars. (We may have just inadvertently quoted Gatsby. Or maybe advertently.)

With the magnates and fat cats of Victorian America among her clientele, The Queen Victoria Inn thrived in those days. Now, visitors to the establishment have reported the ghostly apparition of the building’s former manager drifting aimlessly along the halls of one of buildings, the House of the Royals, searching out the errant customer, dreadfully behind on his payments to the house.

So, to honor this lost soul, we’ve made her into a beer.

And this ain’t one of your usual, everyday sour beers. We conditioned Brothel Madam on raspberries and cranberries. 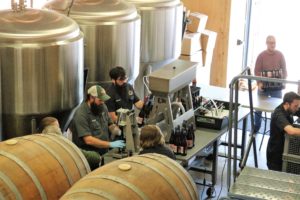 “Yeah, first foray into fruiting our sours!” Brian says, enthusiastically. “Fruited sours are fantastic, some of my favorite ones in fact. The right fruit added to the right sour can paint a richer picture, add more depth.”

When you’re fruiting a sour beer, you’re looking for a relatively basic base beer — sort of a blank canvas for the fruits and the esters to shine through — so we waited a bit before we tried it.

“We wanted to make sure that first we had our process down to ensure we were making good stand-alone sour beers, but then also wanted to wait until we had the right sour beer to add fruit to,” Jimmy says.

This brew was the perfect candidate.

“It was good but simple with some classic Brett esters, some notes of stone fruits, and just a touch of tart from the Brett as well,” Jimmy says. “It was good but needed a little je ne sais quoi, and we knew this was our beer to add fruit.”

You don’t want to add fruit to a beer to mask an off-flavor or cover up a mistake. “That’d be like dry-hopping a shitty beer to try to cover up the flaws,” Brian says.

You’re looking for a good, solid beer for the base, and we’d brewed a good one. 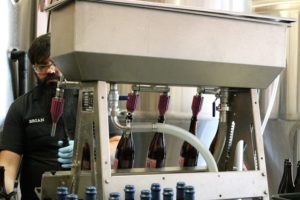 “It was quite enjoyable,” Brian says. “It just needed a little something extra, some more pizzazz to push it from being a beer where you go, ‘Hmm, that’s enjoyable. Maybe I’ll have another one day,’ to a beer that makes you think, “Damn, that’s a nice beer – I’m going back to grab another bottle!’”

Fruited sours aren’t all that uncommon, with mango, peach, guava, watermelon, acai, kiwi, and apricot being some common fruits brewers tend to throw at them. The base of Brothel Madam already had some notes of peach and apricot and some tartness from the Brett, so we decided to play up that tartness and increase the fruitiness with some raspberry and cranberry.

“The result is fantastic!” Jimmy says.

Before adding the fruit, we fermented Brothel Madam with Brett for few months in our stainless steel vessels in the sour brewery. Then we added the raspberries and cranberries, and let it age for another five months or so in the stainless before racking it in the oak barrels for further aging.

We’ve had these barrels for quite awhile. They were part of our first shipment of barrels over two years ago, back when Brian was finally able to convince Hank to let him start doing some barrel-aging. 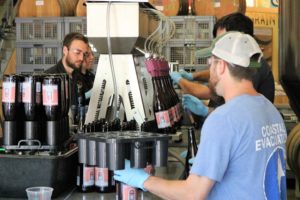 “We didn’t have a direct plan in place for everything from the get-go,” Brian says, “so we just tossed some random beers into six barrels to see what would happen. We didn’t inoculate them with any Brett or bugs, just wanted to see what some wine barrel aging might add to IPA, Coastal, Saison, and Corrosion, and they tasted great after a couple months in the barrels.”

Unfortunately… we kinda forgot about them. We’d just moved into our new headquarters and things were really starting to take off.

“I think I averaged working 60 hours a week that first summer in HQ,” Brian says, not-so-fondly.

Well… that’s what happens when you’re trying to run two production-scale breweries — headquarters and the sour brewery — with a skeleton crew of four guys.

So, those barrels sat a little too long, and by the time we got back to them, they’d turned into an oxidized mess.

“Not anything worth releasing,” Brian says.

The good news is, when we needed some barrels for Brothel Madam, we had six well-hydrated barrels lying around. Brian just had to dump them, rinse them out, and rack the new brew in them for about six months. 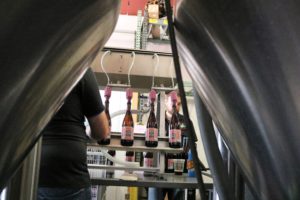 We bottled Brothel Madam this week, letting it bottle condition for a few weeks before we release it to you guys.

And what a bottle it is! Courtney really out-did herself on this one. She captured the Victorian architecture of Cape May and put it on a label: no easy feat.

“Just think about walking down Decatur Street or Jackson Street in Cape May,” she tells us. “The house colors, the gingerbread, the windows and so on.”

Like our first run of the Barrel Aged Series, the labels will all be variations on a theme.

“The colors will match the houses in Cape May, and there will be similarities between each bottle,” she says. “When you line them up, you will have a lineup of houses you might see on the streets of Cape May.” 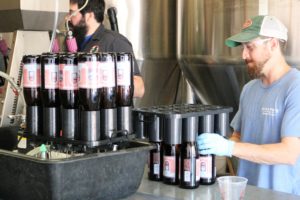 They’re the perfect labels to carry a brew that nears perfection.

Brothel Madam is the perfect brew for the summer months.

“This fruity explosion is going to be great for sitting on the porch as the gentle summer breeze blows by,” Jimmy says.

And Brian agrees. “I dig it, and I think it’s the perfect beer to be coming out Memorial Day Weekend. It’ll be a great summer beer, one I really look forward to going back to again and again.”

Brothel Madam releases from The Brewtique on Saturday, May 27th for $20 — at the height of Memorial Day Weekend. We open at noon, so plan your festivities accordingly.